Trichophagia is the repeated ingestion of hair most commonly associated with compulsive hair pulling (trichotillomania). It can involve eating parts of one’s own hair (such as the roots or tips) or whole strands of hair. Less commonly, trichophagia may involve the eating of hair of other people, animal hair, hair extensions, or brush bristles.

Trichophagia is likely to be the cumulative result of multiple factors, such as genetic predisposition, social environment, and neurobiological factors. There are several psychoanalytic theories and associations, although none are supported by empirical evidence.

What are the clinical features of trichophagia?

Trichophagia may present with symptoms of abdominal pain, nausea, vomiting, recurrent diarrhoea or constipation, and weight loss due to formation of a trichobezoar.

A diagnosis of trichotillomania may have already been made, or signs of hair pulling noted on examination.

Trichophagia may have been observed.

What are the complications of trichophagia?

Trichobezoars are the usual reason for medical presentation of trichophagia. A trichobezoar consists of an accumulation of the ingested hair and food matter in the stomach, and typically takes years of trichophagia to form. The trichobezoar may extend further along the gastrointestinal tract into the small bowel and colon; the 'Rapunzel syndrome'.

The clinical features of a trichobezoar include:

Complications of a trichobezoar can include: 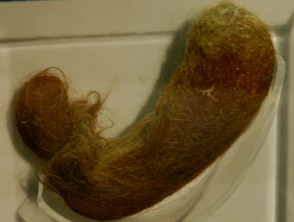 Plain radiographs may show the mass localised in the stomach and the addition of contrast has a typical appearance. Abdominal CT provides an accurate diagnosis in around 97% of trichobezoars. Gastroscopy provides the hair-containing material from the mass to distinguish this from other forms of bezoar.

What is the treatment for trichophagia?

What is the outcome for trichophagia?

Trichobezoar can be life-threatening and requires immediate treatment. Following the removal of a trichobezoar, the prognosis is relatively good if psychotherapy and medical treatment is maintained. Trichophagia may persist or recur.