Home Principles of dermatological practice Structure of the epidermis CME

Structure of the epidermis

The skin of an adult occupies an area of 1.5 to 2 m2. It varies in thickness from 0.3 to several centimetres in thickness. The thinnest sites are the eyelids (a few cells thick) and scrotum. The thickest are the soles and palms (about 30 cells thick). The total weight of skin can reach 20 kg, about 16% of total body weight.

Skin is made up of: 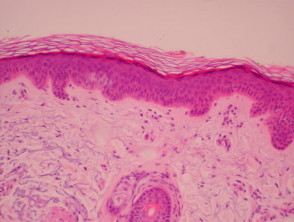 These layers are modified according to the needs of the specific area of the body. For example, the scalp is covered with thick hair, the palms have particularly thick epidermis and the face contains large numbers of sebaceous glands.

Each square centimetre of skin is said to have approximately:

Acid mantle
Skin has an average pH value of 5.5, creating the acid mantle. This is the result of acidic substances such as amino acids, lactic acid and fatty acids in perspiration, sebum and the hormones. There are resident protective microflora (bacteria and yeasts) but the acid mantle repels pathogenic micro-organisms and reduces body odour.

Epidermis
The epidermis is a dynamic structure acting as a semi-permeable barrier with a layer of flat anuclear cells at the surface (stratum corneum). The epidermis regenerates in orderly fashion by cell division of keratinocytes in the basal layer, with maturing daughter cells becoming increasingly keratinised as they move to the skin surface. Immune cells within the epidermis recognise and process small molecules penetrating the skin surface. Pigment cells in the basal layer (melanocytes) protect the skin from ultraviolet radiation. The basement membrane zone is the communication channel between epidermis and dermis.

The epidermis has a complex structure designed to protect from the environment. It has an undulating surface with cross-crossing ridges and valleys, with invaginations due to follicles and sweat duct ostia. Epidermis is thickest on palms and soles, and thinnest on eyelid and scrotum.

Friction ridges
Ridges are particularly well developed on the fingers and toes where they are known as friction ridges with characteristic patterns commonly referred to as fingerprints. The science of ridgeology has been well developed for forensic purposes. 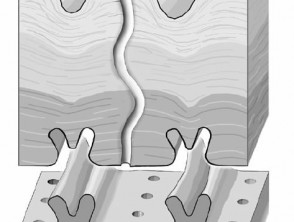 The appearance and structure of normal skin varies according to the site of origin of the tissue and the age, sex and ethnicity of the subject.

Take the Structure of the epidermis quiz

The prevalence of skin diseases

Structure of the epidermis quiz