What is American trypanosomiasis?

Who gets American trypanosomiasis?

American trypanosomiasis is endemic in the southern half of the United States, and 21 countries in South and Central America. It has spread to at least 19 non-endemic countries including through Europe and the Asia-Pacific due to migration and international travel. An estimated 8–10 million people worldwide have Chagas disease, including approximately 500,000 in the US and 100,000 in Europe. In Latin America alone there are 28,000 new cases each year. The WHO estimated more than 16 million people migrated from endemic areas to non-endemic countries between the years 2000 and 2009. Active transmission has then occurred in several non-endemic countries. The majority of cases in non-endemic countries are adult Latin-Americans, most of whom are unaware of their diagnosis. Serological studies in Europe have shown an overall prevalence of 4% in immigrant Latin Americans, and 18% in Bolivians. In 2006, New Zealand had 6315 permanent residents born in endemic countries, with an estimated prevalence of Chagas disease of 98 cases. In 2011, Australia had a predicted 1928 cases in 116,430 migrants. 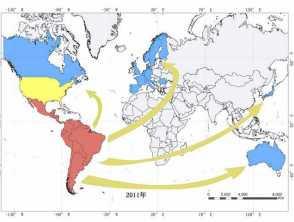 T. cruzi is a zoonotic intracellular parasite that has been identified in pre-Columbian mummies but was only described on April 14, 1909 by Carlos Ribeiro Justiniano Chagas. The parasite spread to humans from mammalian hosts such as armadillos, rodents, and raccoons in the wild following the clearance of forests and jungles for timber and farming. Humans are an accidental host, and infections were initially noted in poor rural workers whose homes were invaded by the triatomine bugs seeking night-time blood meals, but most cases are now identified in urban areas. Domesticated animals have subsequently become infected. In Australia, the animal form of Chagas disease must be notified to the Department of Agriculture.

Triatomine bugs, also known as reduviid or kissing bugs, collect T. cruzi during an infected blood meal and excrete the protozoa in their faeces.

Routes of transmission of American trypanosomiasis to humans include: 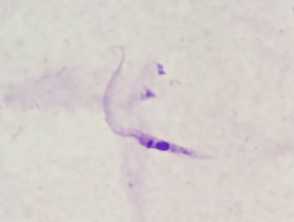 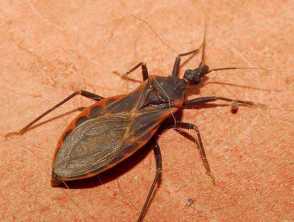 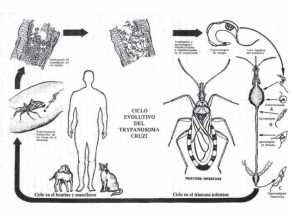 What are the clinical features of American trypanosomiasis?

Parasitaemia resolves after 4–8 weeks and clinical features resolve in 90% of cases.

The severity of chronic Chagas disease is assessed using the Kuschnir classification system ranging from Class 0 having reactive serology, normal ECG, and heart size, through to Class 3 with cardiac enlargement and apical aneurysm.

What are the complications of American trypanosomiasis?

How is American trypanosomiasis diagnosed?

Screening of blood/tissue/organ donors, transplant recipients, and before other planned immunomodulatory treatments

In Australia and New Zealand there are very few laboratories performing serological testing for Chagas disease and confirmatory tests have to be performed overseas. Blood services screen patients based on a questionnaire, excluding potential donors who have a history of Chagas disease, were born in an endemic area, or who received fresh blood components in an endemic area. The former should never become a blood or organ donor, and the latter two groups require negative serology before becoming donors.

What is the treatment for American trypanosomiasis?

Resistance to pyrethroid insecticides was first detected in triatomine bugs in the 1970s associated with vector control failures, and has become more widespread.

What is the outcome for American trypanosomiasis?

Adequate treatment in the parasitaemic phase is effective in nearly all cases. Chronic Chagas disease, and rarely acute Chagas disease, can be fatal resulting in 50,000 deaths annually worldwide, including 12,000 deaths in Latin America per year.