What is an angiosarcoma?

Angiosarcoma is an uncommon and aggressive malignant tumour (cancer) that arises from endothelial cells, which normally line the walls of blood or lymphatic vessels.

Angiosarcomas may occur in any organ of the body but are more frequently found in skin and soft tissue. They can also originate in the liver, breast, spleen, bone or heart.

After they have been surgically excised, angiosarcomas: 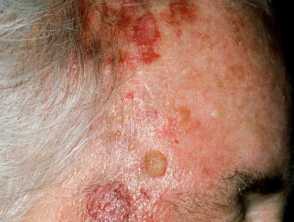 Speading bruise like lesion on the forehead due to angiosarcoma 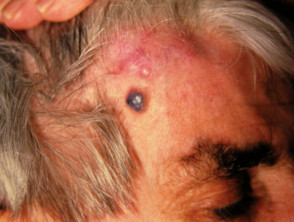 Angiosarcoma is twice as common in men than in women. Angiosarcoma of the head and neck mostly affects older people.

The tumour may develop as a complication of a pre-existing condition. Certain patient groups may be at greater risk of developing angiosarcomas. These include:

The cause of the rapid proliferation and infiltration of malignant endothelial cells in angiosarcoma is usually unknown.

What are the signs and symptoms of angiosarcoma?

The signs and symptoms of angiosarcoma differ according to the location of the tumour. Often symptoms of the disease are not apparent until the tumour has become more advanced.

Symptoms present on the skin include:

Angiosarcoma can also go on to affect the bones as well.

Hepatic symptoms of angiosarcoma can vary and are nonspecific, and can include fatigue, weight loss and pain in the right upper quadrant. Angiosarcoma in the lungs can cause chest pain, bloody sputum, weight loss, cough, and difficulty with breathing

Cutaneous angiosarcoma is the most common form of angiosarcoma not associated with chronic lymphoedema. The disease is primarily located on the head and neck of elderly persons and is also known as Wilson–Jones angiosarcoma, senile angiosarcoma or malignant angioendothelioma.

Clinical features of this form of angiosarcoma are lesions, that most commonly appear on the scalp or upper forehead.

What is the treatment of angiosarcoma?

The optimum treatment of cutaneous angiosarcoma has not been defined. These angiosarcomas are difficult to treat because of their multifocal nature and extensive spread pattern. Radical surgery and postoperative radiotherapy is generally used but tumour recurrence is common after treatment. Despite aggressive treatment, prognosis is often poor.

Paclitaxel is a potent antiangiogenic drug that shows promise in the management of angiosarcoma when administered weekly.