What is chronic arsenic poisoning?

Chronic arsenic poisoning, also called arsenicosis, is due to repeated or continuous exposure to arsenic compounds, leading to the accumulation of arsenic in the body.

Who gets chronic arsenic poisoning?

The three main sources of exposure are occupational exposure, natural contaminants of drinking water (from some deep water wells) and stimulants used by sportsmen and in compounded medications such as the patent medicine, Fowler's tonic.

Occupational exposure is mainly from the smelting industry, in which arsenic is a by-product of ores containing lead, gold, zinc, copper, cobalt, and nickel. It is also used in glass manufacturing and the microelectronics industry (where gallium arsenide is used to produce some semiconductor computer chips).

Arsenic has been found in ancient Chinese medicinal remedies.

Arsenic compounds are well absorbed within 24 hours and redistributed to the liver, lungs, intestinal wall, and spleen, where they bind to the sulfhydryl groups of tissue proteins. Arsenic also replaces phosphorus in the bone where it may remain for years. Hence, chronic poisoning can be detected years after exposure has stopped.

What are the clinical features of chronic arsenic poisoning?

Symptoms and signs of chronic arsenic poisoning may not start to appear until 2 to 8 weeks after exposure and some, such as skin cancers, may take years. 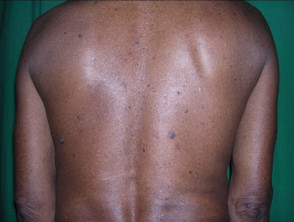 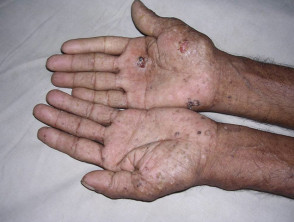 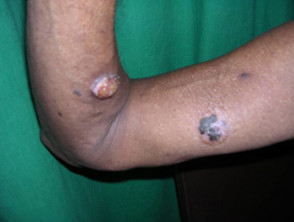 How is chronic arsenic poisoning diagnosed?

Arsenic can be measured in blood and urine samples. Hair and nail samples may detect arsenic if exposure was only recently ceased.

What is the treatment of chronic arsenic poisoning?

There is no specific treatment for chronic arsenic poisoning. Once it has been identified further exposure should be avoided.

Smoking should cease as the risk of lung and bladder cancer is markedly increased in smokers with chronic arsenic poisoning.

Arsenical keratoses may be treated with cryotherapy, curettage and diathermy or, if numerous, topical imiquimod and oral acitretin.

Regular skin checks may be recommended due to the increased risk of non-melanoma skin cancer.

What is the outcome of chronic arsenic poisoning?

Recovery from the signs and symptoms may take weeks to months from when exposure is stopped. In particular, effects on the nervous system may take months to resolve and in some cases, a complete recovery is never achieved.