Basal cell carcinoma (BCC) is the most common form of nonmelanoma skin cancer occurring in the skin. It is a locally destructive tumour with varied clinical and histological appearances.

The key feature of basal cell carcinoma at low power magnification is of a basaloid epithelial tumour arising from the epidermis (figure 1). The basaloid epithelium typically forms a palisade with a cleft forming from the adjacent tumour stroma (figure 2). Centrally the nuclei become crowded with scattered mitotic figures and necrotic bodies evident (figure 3). A useful distinguishing feature from other basaloid cutaneous tumours is the presence of a mucinous stroma (figure 4). Some tumours may also show foci of regression, seen as areas of eosinophilic stroma with lack of basaloid nests. 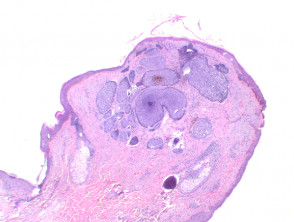 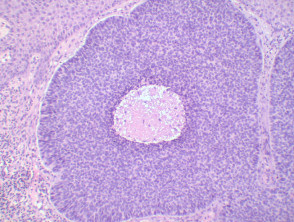 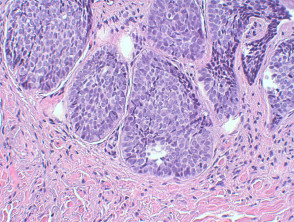 Basal cell carcinoma stains positively with cytokeratin, though favouring cytokeratins from the follicular epithelium. BerEP4 is diffusely present in most tumours, while EMA is infrequently positive.

Superficial BCC: This variant show multifocal nests of atypical basaloid epithelium arising as buds from the basal layer of the epidermis. These nests remain confined to the papillary dermis (Figure 5)

Nodular BCC: The tumour forms a solid tumour nodule or nodules which may extend into subcutaneous tissues. Cartilaginous invasion is unusual (figure 1).

Pigmented BCC: Focal deposits of melanin are evident throughout the tumour. An increased number of melanocytes may also be seen within the tumour, and scattered melanophages may be present in the surrounding stroma (figure 6). 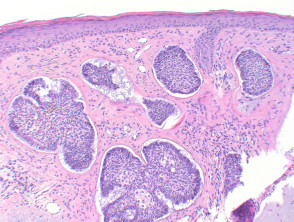 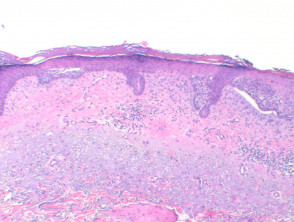 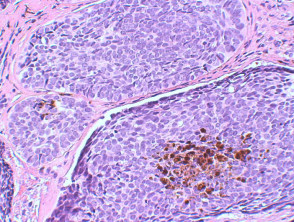 Micronodular BCC: While commonly forming a nodular architecture, the tumour is comprised of multiple small nests. This tumour may also exhibit extensive infiltration into surrounding tissue, and is included within the poorer prognosis subtypes of tumour given the increased risk of local recurrence (figures 7,8,9). 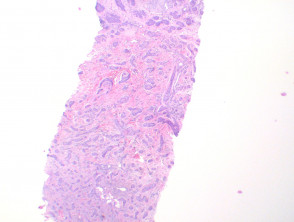 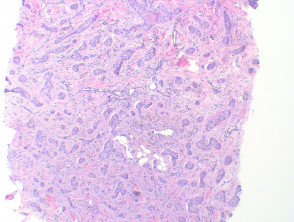 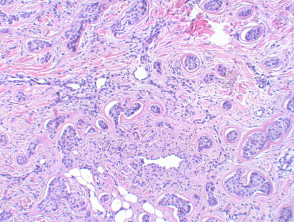 Basosquamous carcinoma: While this tumour may also be considered in the differential diagnosis as within the umbrella of squamous cell carcinoma, the clinical and histological features more closely resemble basal cell carcinoma. The cellular morphology shows areas of large, pale squamoid cells, but lack keratinisation. This therefore shows close resemblance to the metatypical type. These tumours will stain positively with BerEP4 while usually negative for EMA. 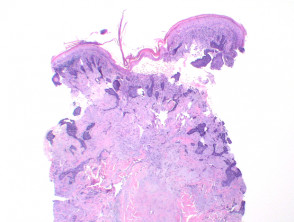 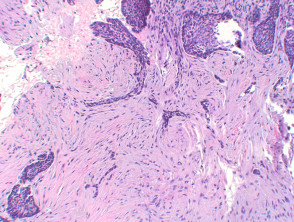 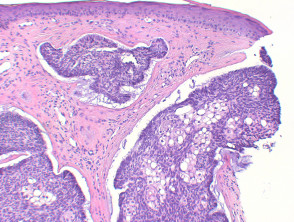 Sebaceoma: This tumour will usually show a more lobulated architecture, and lack palisading, clefting and mucinous stromas. Immunostaining may be helpful with sebaceoma rarely positive for BerEP4, while typically positive with EMA.