Trichoepithelioma is the name given to an uncommon condition in which a single lesion or multiple benign hair follicle tumours (harmless skin growths) arise on the face after puberty. The tumour cells form rudimentary hair follicles but do not form actual hair shafts.

The tendency to multiple trichoepitheliomas is inherited (see Brooke-Spiegler syndrome) but the condition is more common in females.

The tumours are small (usually less than one centimetre), firm, rounded and shiny. They may be yellow, pink, brown or bluish. They usually gradually increase in number with age, occurring on both cheeks, eyelids and around the nose.

A variant is the desmoplastic trichoepithelioma which is a solitary ring-shaped shiny lesion and is usually excised because it can look like a basal cell carcinoma. 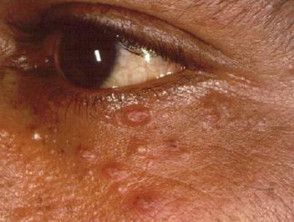 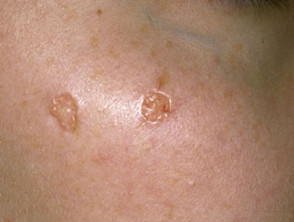 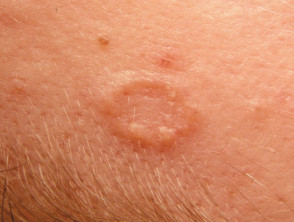 Individual lesions may be confused clinically and pathologically with basal cell carcinoma, which is more common but usually arises as a solitary tumour. Other conditions which can be confused with trichoepithelioma include trichofolliculoma (a solitary tumour arising on the face of the elderly), milia (small epidermal cysts), syringomata (sweat gland tumours most often seen on the eyelids).

Dermoscopy may be helpful. Typically, multiple white clods of variable diameter are seen.

The diagnosis is often only made by pathology after biopsy or after removing the lesion surgically.

Individual lesions may be removed surgically (excision biopsy) if there is any suspicion of malignant change. Carbon dioxide laser and dermabrasion may improve the appearance but partial destruction of the tumour is usually followed by regrowth.