Classified as one of the tumours of the follicular epithelium, trichoepithelioma is thought to arise from the hair germ.

Scanning power view reveals a tumour comprised of multiple nodules situated within the dermis (Figure 1). Small horn cysts, abortive hair follicles and calcification are frequently seen (Figure 2). The stroma is denser and more cellular than with basal cell carcinoma, and there is often focal stromal cracking (Figure 2, arrow). Often pronounced bulbar differentiation may be seen, emulating the follicular bulb and papilla; these structures have been referred to as papillary mesenchymal bodies. (Figure 3, arrow). 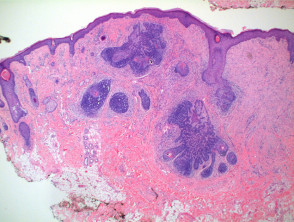 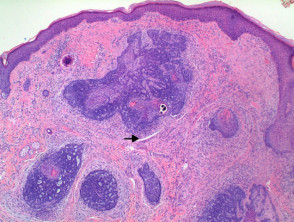 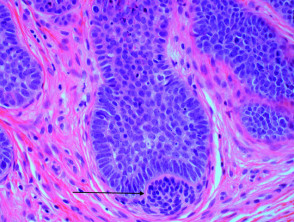 Desmoplastic trichoepithelioma: Scanning power view demonstrates an infiltrating tumour which appears to be arising from the epidermis (Figures 4, 5). The tumour is comprised of small islands of basaloid epithelium superficially which form cords and strands towards the base and periphery (Figures 6, 7). Horn cysts, frequently many, calcification and foreign body granulomas can be seen (Figures 6, 7). The cells are bland and mitotic activity is usually very low, however the infiltrative sclerosing growth pattern can cause difficulty in discriminating this lesion from syringoma or sometimes microcystic adnexal carcinoma (figure 8). Trichoblastoma is a deeper form of trichoepithelioma. 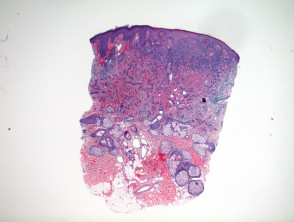 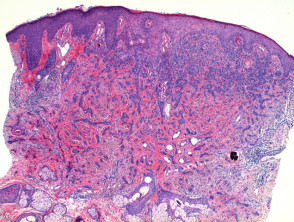 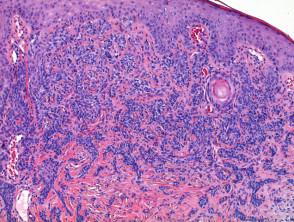 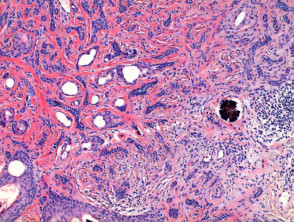 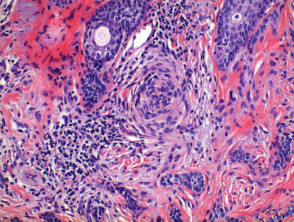 Basal cell carcinoma – Distinction from basal cell carcinoma may at times be difficult even for experienced observers. The epithelium of trichoepithelioma demonstrates intimate integration with the surrounding matrix which is often cellular and fibromyxoid and show stromal clefting (Figure 2). In contrast, basal cell carcinoma typically exhibits at least some retraction (clefting) between the epithelial cells and the surrounding epithelium and may show mucin deposition. Papillary mesenchymal bodies (see figure 3 above) can serve as an important clue to trichoepithelioma. Immunohistochemistry is typically unhelpful but numerous stains are sited in the literature including Bcl-2, Ber-Ep4 and CD34. 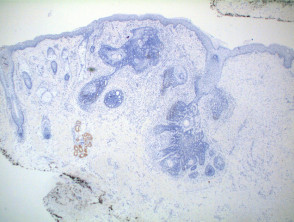 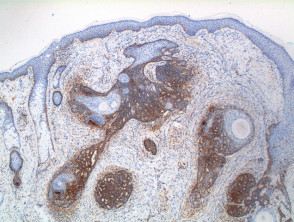