Combined trichoepithelioma and cellular blue naevus is a rare lesion that may mimic melanoma clinically.

In combined trichoepithelioma and cellular blue naevus, the histopathology shows a fairly well-circumscribed biphasic dermal proliferation involving the full thickness of the dermis and shows tongues of rounded tumour fronts (figure 1). The tumour is composed of intimately mixed populations of melanocytes and basaloid cells. The basaloid cells anastomose in a lace-like pattern and form horn cysts focally (figure 2,3). The follicular component is surrounded by a prominent stroma, which is condensed around the basaloid islands as hair papilla-like structures. The melanocytic component consists of islands of plump spindled cells with abundant pale cytoplasm and minimal pigment and rarer slender dendritic melanocytes with heavy melanin pigmentation (figure 4). 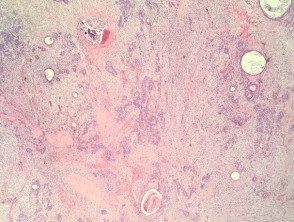 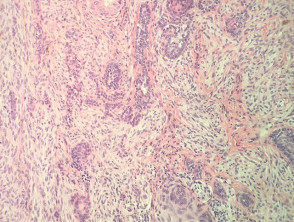 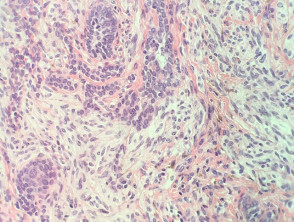 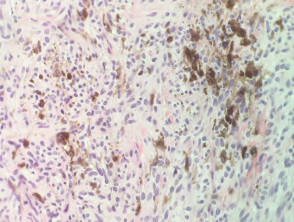 The follicular and melanocytic components stain strongly with p63 and S100, respectively, and there is no cross-over of staining.

The differential diagnosis for combined trichoepithelioma and cellular blue naevus