Blue naevi are benign lesions often appearing in childhood or adolescence. Blue naevi and dermal melanocytoses are thought to result from the dermal arrest of precursor cells migrating from the neural crest in a similar manner to congenital naevi. GNAQ/GNA11 mutations have recently been found in various forms of blue naevi. The causative cells are dendritic melanocytes, which are bipolar or stellate and have lengthy dendritic processes. These cells typically produce abundant melanin.

Also known as dermal melanocytosis, mongolian spots, naevus of Ota and naevus of Ito are histopathologically similar to blue naevi and are characterized by a sparse population of scattered dendritic melanocytes in the reticular dermis without stromal alteration (figure 1). 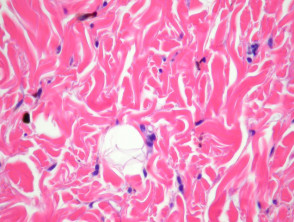 Histopathologically, blue naevi have a collection of dendritic melanocytes in the dermis (figure 2). Pure common blue naevi should not involve the epidermis. The connective tissue surrounding the melanocytes is usually sclerotic, sometimes profoundly so, when it is described as a sclerotic blue naevus. Aggregation of melanocytes about appendages and neurovascular bundles is common. Melanophages are usually also present in large numbers, which partially explains the blue clinical presentation.

Uncommonly, the dendritic melanocytes do not produce melanin (amelanotic blue naevus). These cases can cause diagnostic confusion due to their morphologic similarity to dermatofibroma or an extremely difficult desmoplastic melanoma (figure 3). Remarkably, cutaneous metastases of conventional melanoma can appear morphologically identical to blue naevi. 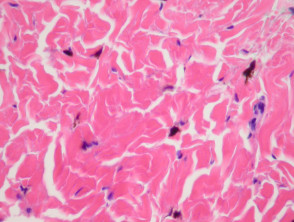 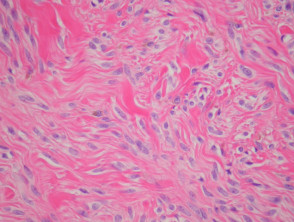 Epithelioid blue naevus is also called pigmented epithelioid melanocytoma. Instead of slender dendritic melanocytes, the cells of an epithelioid blue naevus are large, round and have a pale cytoplasm (figure 4). The cellular morphology may be difficult to appreciate without bleaching the section to expunge the copious melanin pigment. The nuclei are generally uniform without mitotic activity. In fact, if mitoses are easy to find, the lesion is more likely to be an unusual melanoma.

Patients with Carney complex may develop multiple epithelioid blue naevi. Some of these lesions are called animal melanoma, because they resemble melanoma seen in animals. Figure 5 was in fact a melanoma from a grey horse. 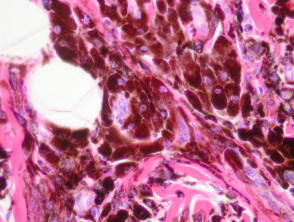 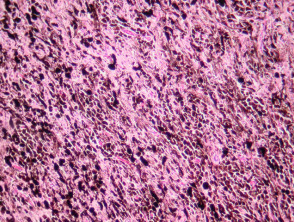 Cellular blue naevus is generally much larger than a common blue naevus and usually involves the entire dermis. The superficial subcutis is also often involved. The architecture is a rather distinctive mass composed of a lobular tongue or tongues into deep dermis (figure 6). The cellular density is markedly higher when compared with regular blue naevi. The cells may be round, oval or fusiform. Multinucleate giant cells are occasionally noted in the cellular areas and may be numerous in some cases.

Necrosis and/or numerous mitoses suggest that the tumour is an unusual melanoma rather than a cellular blue naevus. 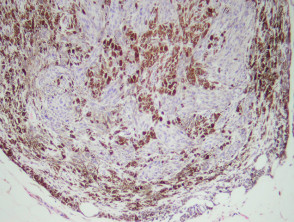 These blue naevi are really just large common blue naevi. They are sometimes clinically confused with mongolian spots. They can measure up to 10 cm and are usually congenital.

The term combined naevus is used to describe two or more distinct naevus cellular elements, or lines of neural crest differentiation, in a single melanocytic naevus. For example, some naevi may have components of a dysplastic naevus, blue naevus, Spitz naevus and congenital naevus within the same lesion. Combined naevi can be problematic, particularly when there is a component of Spitz or clonal epithelioid cells, as they can mimic melanoma developing in a naevus (figure 7). They are also clinically problematic, e.g. a small component of blue naevus can easily be mistaken for melanoma developing in a bland naevus. 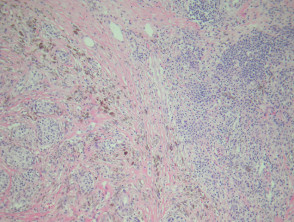