Sebaceoma belongs to the group of benign sebaceous tumours.

Scanning power of the histology of sebaceoma demonstrates a relatively well-circumscribed tumour nodule typically within the deep dermis frequently with attachment to the epidermis. Low power identifies a lobulated tumour, which may demonstrate areas of cyst formation (Figure 1). The tumour is comprised of basaloid cells and a minority of sebaceous cells in addition to small ducts with the crenelated eosinophilic lining seen in sebaceous ducts (Figures 2, 3 and 4). A variable number and distribution of sebocytes is seen, but should remain the minor proportion compared to the basaloid component. Frequent mitoses can be seen in this tumour, though cytological atypia is lacking (Figure 5). 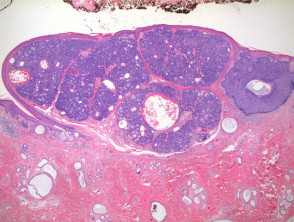 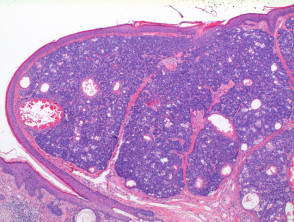 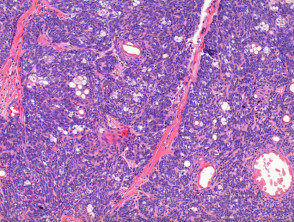 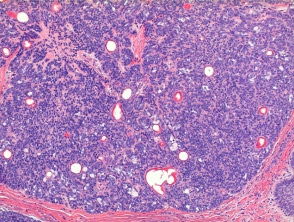 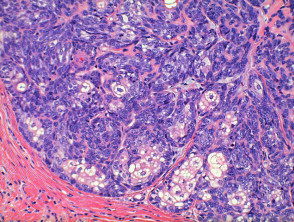 Sebaceous tumours are associated with visceral neoplasms, most commonly gastrointestinal, in the Muir-Torre syndrome [see Lynch syndrome]. Tumours can be shown to demonstrate microsatellite instability, reflecting mutations in mismatch repair genes. Loss of expression of MLH1, MSH2, MSH6 and PMS2 proteins can be seen on readily available immunohistochemical stains and can identify patients at risk of germline DNA mismatch repair gene mutations.

This tumour may be seen arising in association with sebaceous naevus (Figures 6 and 7). Note the distinct basal cell carcinoma arising adjacent to the sebaceoma (Figure 6). Figure 7 demonstrates loss of mature follicular structures and dilated eccrine ducts and glands beneath the sebaceoma consistent with pre-existing sebaceous naevus. 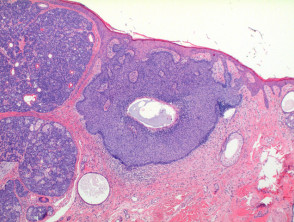 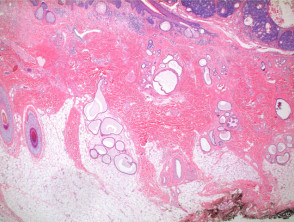 Sebaceous adenoma: This tumour is comprised of predominantly sebaceous lobules with a rim of basaloid germinative cells. The sebaceous component forms the majority of the tumour here.

Sebocrine adenoma: Less sebaceous cell infiltrate is seen and visible ducts are small and lack the eosinophilic lining. The proliferation has the appearances of a poroma with sebaceous differentiation.

Sebaceous carcinoma: While an increased number of mitoses can be seen in sebaceoma, the presence of cytological atypia, areas of necrosis, deep extension, or adnexal or lymphovascular invasion is suggestive of malignancy.