When melanoma is found and removed in its early stages, over 90% of people are long-term survivors. However, if the melanoma has already reached an advanced stage when discovered, and has spread to other organs in the body then your chance of making it through are slim. Less than 20% of people survive for 5 years after melanoma metastases have been found. The best cure for melanoma is early detection.

You can help find melanoma early. If you're an adult, particularly if you are older than 50 years or if melanoma runs in the family, you should: 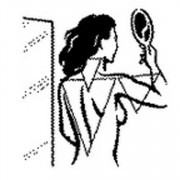 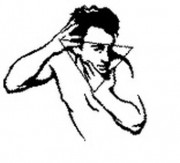 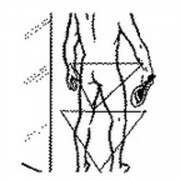 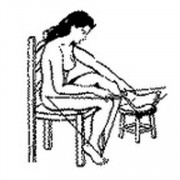 Watch our video on how to do a self-examination.

When doing a self-check for melanoma there are certain features you can look out for in your spots and moles. Two methods you can use to help ‘spot the difference’ are the Ugly Duckling Sign and the ABCDE+EFG of melanoma.

Most moles and spots on your body are the same or are similar-looking to each other. The method behind the Ugly Duckling Sign is for you to compare your moles with each other. If any mole stands out or looks different from that of surrounding moles, it is the ugly duckling, the odd-mole-out, the 'lone ranger'.

If you find an ugly duckling mole with any of the ABCDE+EFG, you should get it checked out by a doctor immediately.

These little spots looked different from the other moles. When cut out, they all proved to be early melanoma.

The ABCDE signs are useful for detecting early superficial melanomas.

Melanomas are not usually symmetrical in shape. If you draw a line down the middle of the mole, the two sides don’t match 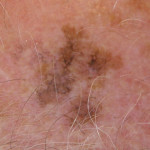 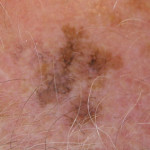 Melanomas usually have crooked borders or edges that tend to be uneven and ill-defined. 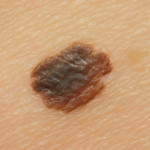 Melanomas are often more than one colour. They may be mixture of different colours (red, blue, black, or brown) or shades of one colour such as shades of brown, tan, or black. 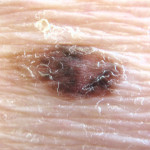 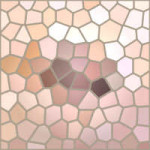 The letter D means different (ugly duckling) but is also used to describe:

Melanomas are often bigger than 6 mm in diameter (that is about the size of a pencil head) but can be smaller if picked up early. 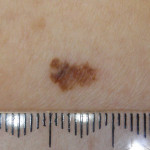 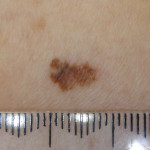 This means that you need to be aware of any changes that have occurred since you last checked the spot. Changes may be in the size, shape, colour, or thickness, and any new symptoms such as bleeding, itching, or crusting. 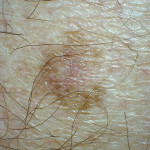 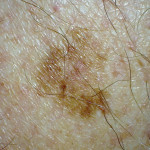 The EFG signs are useful for detecting nodular melanoma which typically do not have the early flat growth phase.

Nodular melanoma is raised above the surrounding skin.

Nodular melanomas are often firm to the touch.

If you find a mole or spot with any of the ABCDE+EFG, you should get it checked out by a doctor.

Watch our video on how to do a self-examination.

Previous: Spot the difference! Next: See your doctor.

The video below on self skin examination and is hosted by DermNetNZ. It has been produced in association with Dr Paul Jarrett and Melanoma New Zealand.