What is cutaneous myeloid sarcoma?

Myeloid sarcoma (MS) is a rare tumour consisting of myeloid blast cells, which can be immature or mature, occurring at a site other than the bone marrow (extramedullary leukemia). It may also be known as chloroma or granulocytic sarcoma. It can develop as part of acute myeloid leukaemia (AML), or in the setting of other myeloproliferative disorders (MPD) or myelodysplastic syndromes (MDS). Rarely, it is associated with chronic myeloid leukaemia (CML).

MS sites of involvement can include several organs, with skin, lymph nodes, and bones being the most affected sites. Skin involvement (cutaneous myeloid sarcoma; CMS) occurs in approximately 17–28% of cases. Myeloid blasts are thought to migrate to the skin due to expression of chemokine receptors and adhesion molecules by skin cells.

Large studies of cutaneous myeloid sarcoma are lacking and mainly consist of case reports or very small retrospective studies. In most cases, CMS represents an aggressive manifestation of the underlying haematological disorder.

Who gets cutaneous myeloid sarcoma?

There is a slight male predominance in CMS (approx. 1.4:1). It can occur at any age, but is more common in adults between 45 and 55 years old.

Chromosomal abnormalities have been described in those with CMS.

What are the clinical features of cutaneous myeloid sarcoma?

CMS shares many features with myeloid sarcoma appearing elsewhere in the body. The clinical presentation of the lesions are very variable. They can appear as:

The majority of cases reported present with multiple papular and nodular lesions. Ulceration has occurred in a small number of cases. 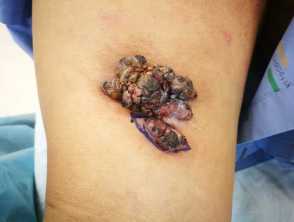 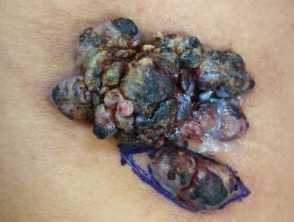 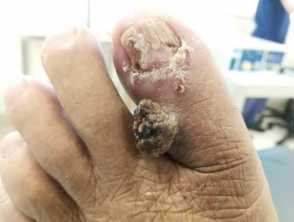 CMS lesions tend to occur on the trunk (in about 40% of cases), the extremities, and head and neck.

How is cutaneous myeloid sarcoma diagnosed?

CMS can only be diagnosed by histopathology and immunohistochemistry. However, it can often be challenging to diagnose due to the small size of biopsy specimens, lack of expression of definitive immunohistochemical (IHC) markers, and difficulty in distinguishing between non-cancerous and cancerous monocytes.

The most sensitive markers are CD68 (expressed in about 91–100% of cases) and CD43. A negative result for one or both markers makes a CMS diagnosis unlikely.

Other sensitive markers are myeloperoxidase and lysozyme. CD34 and CD117 are also useful and more specific markers recommended to identify CMS, although a high percentage of CMS cases can lack expression of one or the other.

Cytogenetic abnormalities have also been detected in a majority of cases, indicating the aggressive nature of the disease. 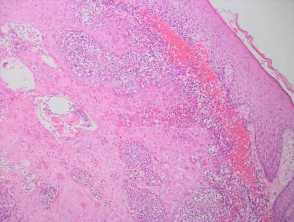 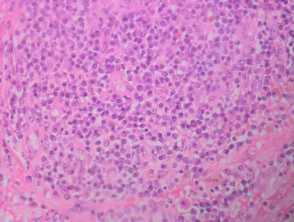 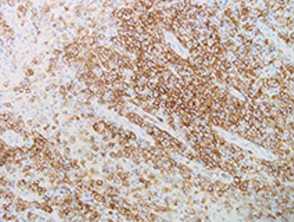 What is the differential diagnosis for cutaneous myeloid sarcoma?

As the clinical appearance can be variable, it includes almost any cause of a nodule, plaque or ulcer including:

What is the treatment for cutaneous myeloid sarcoma?

Recommended treatment involves conventional systemic treatment with chemotherapy, and consideration of radiotherapy, or surgery, or a combination of the two. For CMS, radiotherapy is preferred over surgery. Some retrospective studies have shown promising results for bone marrow transplantation (BMT) and encourage consideration of allogeneic BMT after the patient’s first induction of remission.

What is the outcome for cutaneous myeloid sarcoma?

Relapses for myeloid sarcoma are very rare, but have been known to occur after a median time of approximately 7 months.

The prognosis of MS is difficult to reliably determine due to the limited number of cases published. From one study, there is no significant difference in prognosis whether the myeloid sarcoma is secondary or arises de-novo but the reported overall survival had a broad range from 2 months to 10 years.

For CMS more specifically, it has a poor prognosis with worse outcome than that for myeloid sarcoma in general. A retrospective study showed that in 94% of patients who were treated with chemotherapy, the one year survival rate was 13.6%.