Erythema nodosum is the most common form of panniculitis. It typically presents as tender, erythematous, subcutaneous nodules and plaques, arising in crops most commonly on the pretibial areas bilaterally.

Miescher's radial granulomata that consist of small nodules composed of spindle to oval-shaped histiocytes arranged around minute slits are thought to be a relatively specific finding for erythema nodosum (figure 4).

Early lesions may be difficult to diagnose on histopathologic features alone. Sections may shows oedematous septa containing a prominent mixed inflammatory infiltrate, and minimal fibrosis. As the lesions evolve, there is neutrophilic infiltration followed by chronic infiltrates, granulomas and septal fibrosis.

Small vessel vasculitis (or venulitis) may be seen in early lesions. 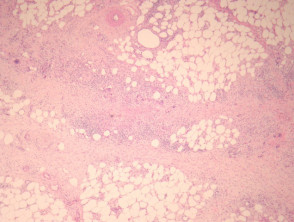 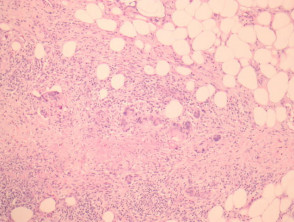 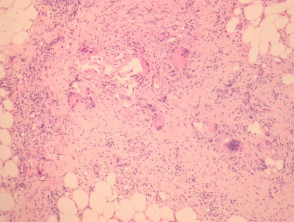 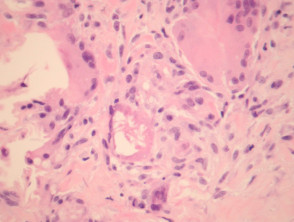 None are are generally needed. Heavy neutrophilic infiltrates may prompt staining for microorganisms.

Late lesions may resemble other causes for sclerosis of the subcutis, including resolving fat necrosis, dermatitis artefacta, and lipodermatosclerosis.