Scanning power view of necrobiosis lipoidica demonstrates a layered inflammatory process and alternating zones of necrobiosis involving the full thickness of the dermis (Figure 1). The changes tend to become more pronounced deeper in the dermis and may extend into the septal panniculus (Figures 2 and 3). The areas of necrobiosis are poorly defined and run into each other with broad foci of inflammatory infiltrate intervening (Figure 4). This may form a stacked ‘lasagne’ type appearance. A variable histiocytic infiltrate with multinucleated giant cells surrounds these areas. The accompanying inflammatory infiltrate is predominantly lymphocytic with plasma cells and occasional eosinophils (Figure 5). As lesions age an increasing degree of dermal fibrosis is seen. 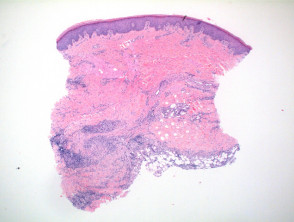 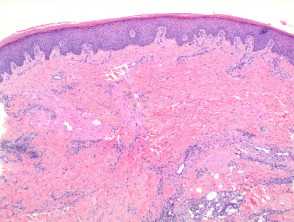 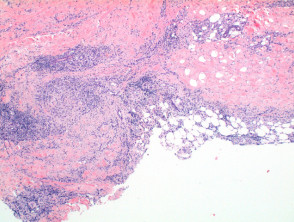 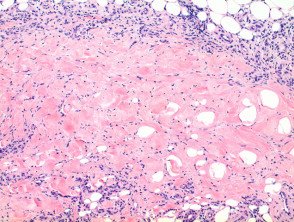 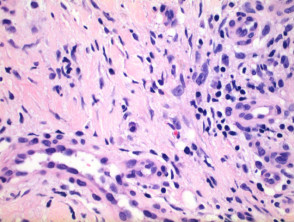 Granuloma annulare: In this condition the areas of necrobiosis are better defined with dermal sparing between these granulomatous foci. Plasma cells are more commonly a feature of necrobiosis lipoidica.

Necrobiotic xanthogranuloma: Here there is a more prominent foamy histiocytic infiltrate with numerous touton and foreign body type giant cells. Cholesterol clefts favour this condition but have been reported also in necrobiosis lipoidica. When in doubt the clinical details are usually discriminatory.