The scanning view of the histology of granuloma annulare shows a granulomatous inflammatory pattern situated within the superficial and mid dermis. 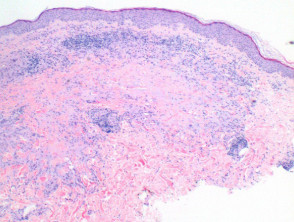 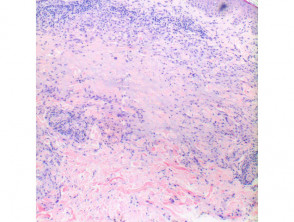 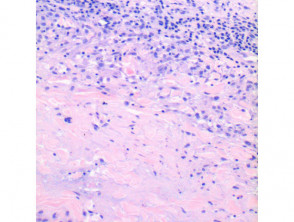 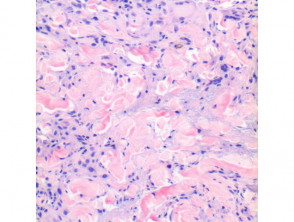 Subcutaneous GA: In this variant the inflammatory infiltrate is predominantly within the deep dermis and extends into the subcutaneous tissue (Figure 5, 6). Large areas of necrobiosis can be seen along with increased numbers of eosinophils (Figures 7, 8, 9). 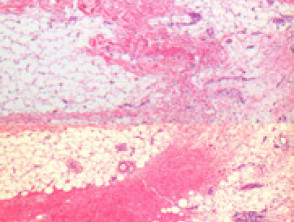 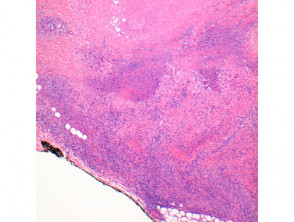 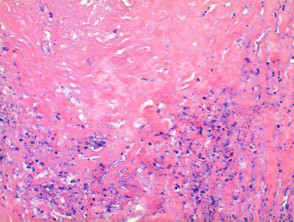 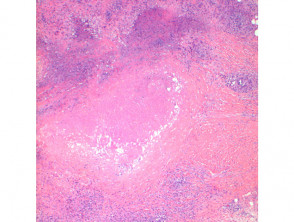 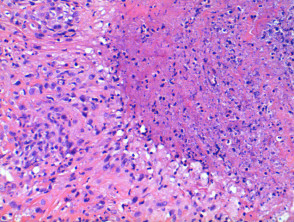 Perforating GA: Here the inflammatory infiltrate can be seen to be eliminated through the epidermis via a channel formed between epidermal downgrowths.

Disseminated GA: While the histology may be identical to typical GA, the infiltrate may be sparse and retained within the papillary dermis. Lichen nitidus is sometimes considered in these cases.

Interstitial GA: The low power pattern is different, showing a 'busy dermis' and lacking the necrobiotic and mucinous foci. High power reveals the interstitial infiltrate of benign appearing histiocytes. While less conspicuous, increased mucin is frequently seen around the inflammatory infiltrate. In the presence of many eosinophils and interface changes an interstitial granulomatous drug reaction should be considered.

Mucin stains such as colloidal iron and alcian blue may be used to highlight the increased connective tissue mucins.

Rheumatoid nodule: The changes seen here are most similar to the subcutaneous variant of GA. Discriminating features seen in the rheumatoid nodule includes the presence of larger areas of eosinophilic necrobiosis, and a lack of mucin deposition. Clinical history is usually informative.

Epithelioid sarcoma: Always think twice when diagnosing GA on the digits. While the low power pattern may be similar due to the eosinophilic areas of necrosis, closer inspection will always reveal an atypical infiltrate. Immunohistochemistry is definitive in difficult lesions showing Epithelial membrane antigen (EMA) and Cytokeratin (CK) positivity.