Palisading xanthogranulomas with foci of necrobiosis are found in the mid dermis and panniculus (Figures 1, 2). Involvement of the panniculus is septal (figure 2) and may mimic panniculitis. Focal areas of necrobiotic collagen appear as amorphous eosinophilic debris (Figure 3) and often contain cholesterol clefts. Granulomas consist of foamy histiocytes (Figure 4, arrow), and giant cells (Figure 5). Both touton and foreign body giant cells are found. Quite striking angulated giant cells with darkly staining nuclei adjacent to areas of necrobiosis are a characteristic feature. Plasma cells are typically prominent. Sometimes there are dense lymphoid infiltrates with germinal centres. 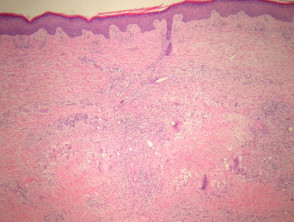 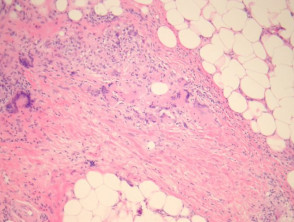 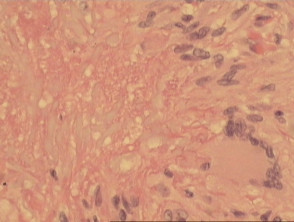 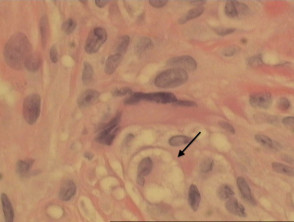 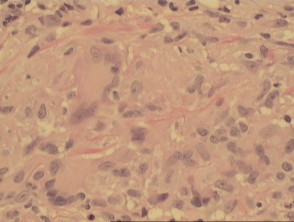 Granuloma annulare: zones of necrobiosis surrounded by palisading macrophages and lymphocytes. Giant cells and plasma cells are much less prominent than in necrobiotic xanthogranuloma. Absence of cholesterol clefts.