Folliculosebaceous cystic hamartoma represents a cutaneous biphasic hamartoma. It is composed of epithelial and mesenchymal components in varying proportions, typically occurring in adults in the head and neck area. Several pathogenetic mechanisms underlying this adnexal neoplasm have been proposed. However, there remains much controversy as to whether it represents a distinct entity or part of an evolutionary spectrum of trichofolliculomas (TF). Since the introduction of this entity in 1991, there have been some case reports documenting a range of mesenchymal changes seen in FCH as well as uncommon and unusual associations. 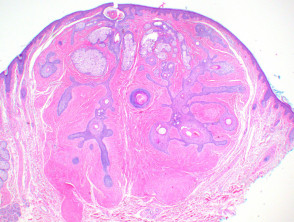 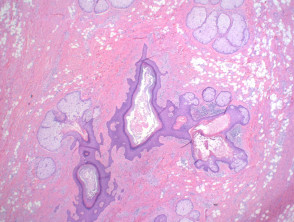 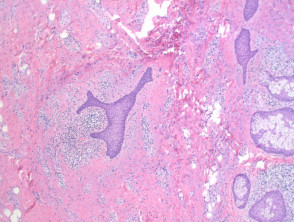 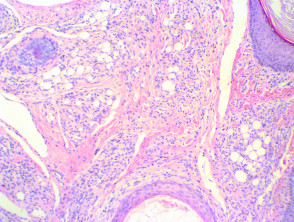 Trichofolliculoma: Attempts to distinguish sebaceous trichofolliculoma from folliculosebaceous cystic hamartoma on clinical and histologic grounds have been made. It has been suggested the latter lesion clinically presents as a papulonodular lesion without hairs. Histologically, FSH demonstrates more prominent stromal mesenchymal abnormalities.