Trichofolliculoma presents as a small, solitary flesh-coloured or whitish nodule that occurs most often on the face around the nose region. Centrally, there is a pore which sometimes may contain numerous hairs.

In trichofolliculoma, sections show numerous small follicles radiating from a central larger follicle. The hairs are surrounded by a well circumscribed dense stroma. (figures 1–3). The surrounding hairs are generally very small (vellus). Intermixed Merkel cells and sebocytes may be seen. A sebaceous variant has been described (sebaceous trichofolliculoma).

As with all follicular tumours, there may be numerous mitoses/apoptotic figures within basaloid cell nests which are contributing to the production of a hair shaft – these should not be confused with a proliferating malignant process. 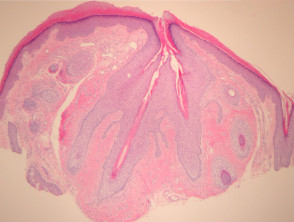 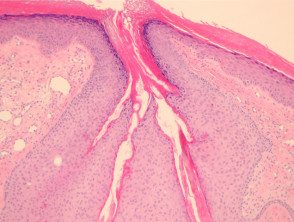 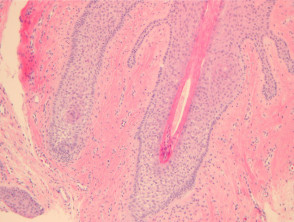 Trichodiscoma/fibrofolliculoma – Follicular epithelium surrounded by a perifollicular fibrous sheath. The epithelial strands are composed of thin cords of epithelial cells. These may be associated with Birt-Hogg-Dubé syndrome.

Neurofollicular hamartoma – These are thought to be a spindle cell rich form of trichodiscoma by some authorities. The spindle cells are often positive with S100 and CD34.