Table of contents
What are grey circles? Appearnace on a dermatoscope Conditions that show grey circles Histological explanation

What are grey circles?

In dermoscopy, a grey circle consists of a continuous curved grey line, equidistant from a fixed centre point.

What do grey circles look like through the dermatoscope?

Grey circles are seen through the dermatoscope as a thin circular line of grey pigment. 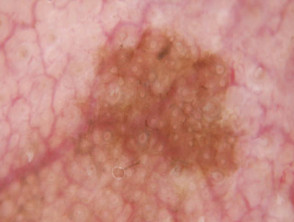 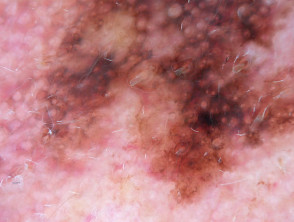 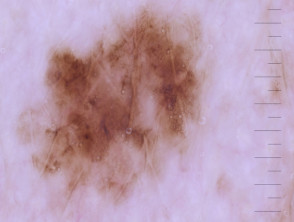 In which lesions are grey circles seen through the dermatoscope?

Dermoscopic grey circles are seen in the following lesions:

Grey dots around the hair follicle openings forming grey circles tend to be coarse in LPLK, whereas in lentigo maligna they are much finer.

A pattern of thin grey circles is the most specific clue to early facial melanoma, but only when pigmentation is confluent, and not grey dots arranged as circles [1].  Grey circles had a sensitivity of 54.2% and a specificity of 83.3% for melanoma on the face [2]. 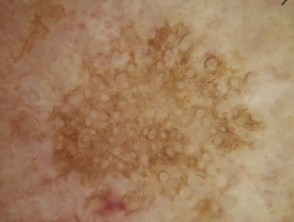 Grey circles seen in dermoscopy of a facial solar lentigo. 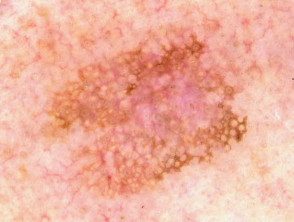 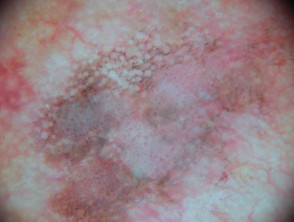 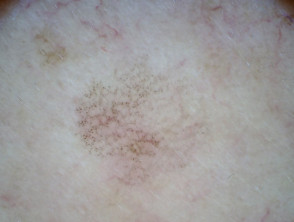 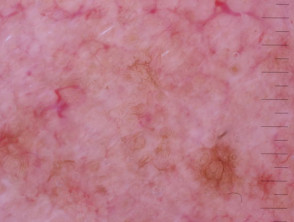 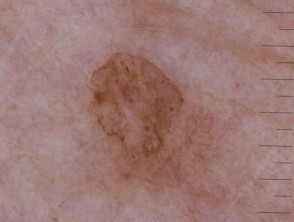 Grey circles in a solar lentigo

A circle within a circle consists of an asymmetrical pigmented follicular opening with a darker dot located within the ostial opening [3].  Circles within circles are a specific clue for facial melanoma in situ but are rarely present; they have poor sensitivity and are found in only 4.2% of flat facial melanomas [2].  They can also be found in pigmented actinic keratosis, but rarely [3]. Circles within circles are also known as concentric circles and the 'isobar' sign. 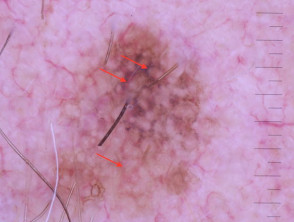 What is the histological explanation of grey circles?

Circles on facial skin reflect prominent hair follicles with associated pigmentation in an otherwise featureless epidermis. Pigmentation may be within the epithelium giving grey circles in melanophages around hair follicles resulting in circles comprising grey dots. Th may also involve the intervening epidermis giving grey circles in a structureless brown background. It should be noted that nonpigmented follicular openings do not constitute a pattern of circles [4]. 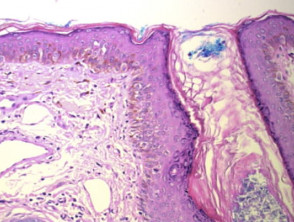 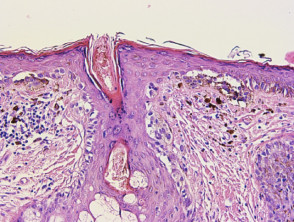 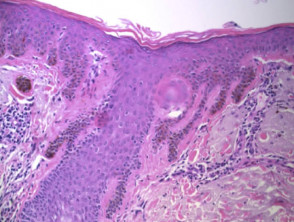 Involvement of follicular infundibula displayed as circles on dermatoscopy 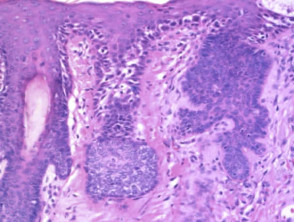 Involvement of follicular infundibula displays as circles on dermoscopy.