What is a lax beetle?

Lax beetles are common insects that are found worldwide, belonging to the family Oedemeridae [1–3]. The beetles are 6–20 mm long, soft-bodied, and slender. The body is a light brown colour with darker brown/black stripes or spots down the plate-like structure on the back [1,2].

Lax beetles are also called false blister beetles because the male beetles produce cantharidin, which is also found in the true blister beetles of the family Meloidae, to which they are closely related [1,3,4]. Meloidae beetles are not found in New Zealand. Cantharidin extracted from the beetle Cantharis vesicatoria is sometimes used to treat viral warts and molluscum contagiosum. ‘Kantharis’ means ‘blister fly’ in Greek [5]. 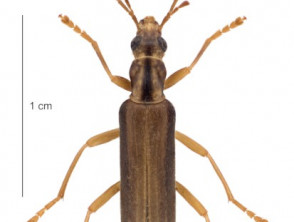 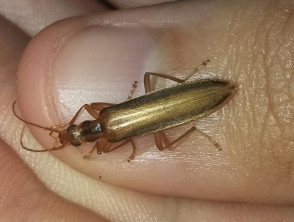 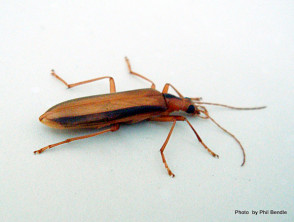 Where are lax beetles found?

In New Zealand, most lax beetles are native with several adventive species, meaning they could have been introduced from other countries by humans [3]. The beetles are found in the North and South Islands of New Zealand, Stewart Island, and the Chatham Islands [2,3].

Beetles and young grubs are found on driftwood or rotting wood just above high tide in coastal areas and on vegetation inland. Adults are found under the bark of dead tree trunks and on tree branches. They feed on pollen and nectar from flowers or vegetation. On summer nights, adult beetles are attracted by and fly to bright artificial white lights [1–3].

Who gets blisters from the lax beetle?

Anyone can get blisters if the beetle is crushed, brushed or pressed against the skin when gardening or during outdoor activities. Sometimes called ‘morning blisters’, they occur hours after contact with the beetle [1,5,6]. 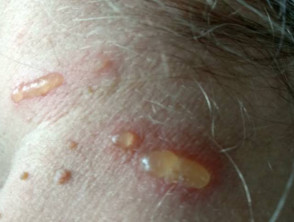 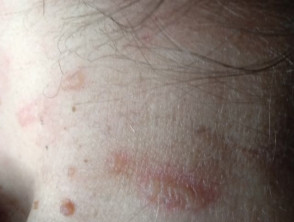 Crushing the beetle on the skin, or pressing or accidentally brushing against the skin, causes the beetle to release a fluid called haemolymph from its leg joints. The fluid contains cantharidin or cantharid, which is intended to deter predators from eating the beetle eggs and is irritating to human skin [1,3,7]. The male beetle passes the blistering fluid to the female beetle during mating [5].

The beetles do not bite or sting [8].

What are the clinical features of lax beetle dermatosis?

What are the complications of lax beetle dermatosis?

There are no complications from blister beetle dermatosis, which heals within a few days without scarring [6,9].

How is lax beetle dermatosis diagnosed?

Lax beetle dermatosis is diagnosed from the clinical appearance and history of contact, or likely contact with a lax beetle.

What is the differential diagnosis for blister beetle dermatosis?

Other blistering conditions that may need to be considered include:

What is the treatment for blister beetle dermatosis?

Blister beetle dermatosis can be prevented by avoidance of contact with the beetle.

What is the outcome for lax beetle dermatosis?

The lax beetle blisters heal in 4–7 days without ulceration, infection, or scarring [6,9].