Lichen aureus is a distinct subtype of pigmented purpuric dermatosis. Clinically, it usually effects children or young adults and presents as persistent rust-coloured plaques on the lower extremities.

In lichen aureus, sections typically show a distinct pattern of infiltration in all types of pigmented purpuric dermatitis, with infiltration around the small vessels of the superficial plexus and minimal epidermal reaction (figure 1). At higher power, the infiltrate is mainly composed of lymphocytes with quite an impressive proportion of histiocytes (figure 2). The vessels may have some prominence of the endothelial cells but there is no evidence of vascular damage. A key feature of all types of pigmented purpuric dermatitis is the presence of haemosiderin within the superficial dermis, which results from chronic leakage of red blood cells from the vessels. 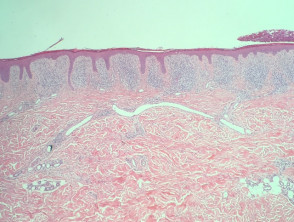 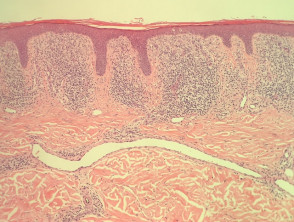 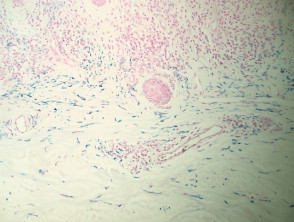