Lichen striatus presents as as an erythematous papules which often join together to form a linear band following Blaschko lines.

In lichen striatus, sections show a lichenoid infiltrate involving an epidermis which is usually acanthotic (figure 1). The infiltrate can be very dense or quite sparse (figures 1, 2) and there may be numerous melanophages in the superficial dermis. Apoptotic keratinocytes are usually seen at all levels of the epidermis. 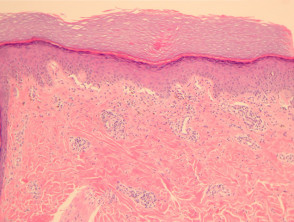 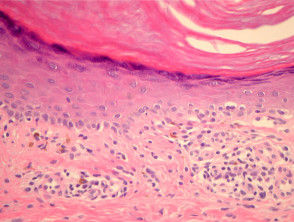 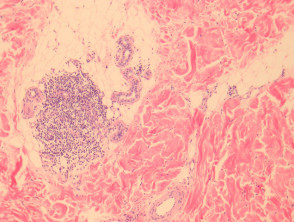 The clinical presentation is helpful.

Lichen planus or lichen planus-like keratosis — The infiltrate does not usually involved eccrine glands and apoptotic keratinocytes are mainly limited to basal epidermis rather than all levels of the epidermis.

Annular lichenoid dermatitis of youth — The histology may be identical and annular lichen striatus may actually be the same disorder.