Lymphoepithelioma-like carcinoma of the skin (LELCS) is a very rare primary skin neoplasm that typically occurs on the sun-exposed skin of the head and neck in elderly individuals. The histogenesis of LELCS remains controversial as to whether it has adnexal origin or represents an inflamed squamous cell carcinoma (SCC). 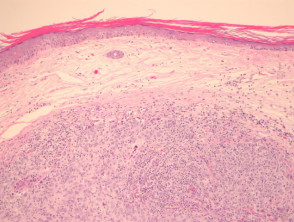 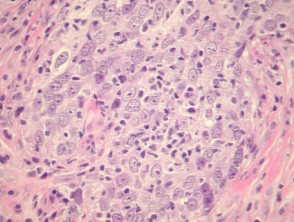 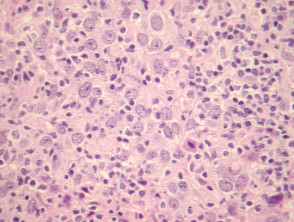 Immunohistochemical studies in lymphoepithelioma-like carcinoma reveal keratin positivity in the epithelioid cells. Markers to rule out lymphoid (LCA), melanocytic (S100), and neuroendocrine (CD56, synaptophysin, chromogranin) may be needed. Epstein–Barr virus-encoded small RNA (EBER) in situ hybridisation for Epstein-Barr virus (EBV) infection may be useful to rule out metastasis from a nasopharyngeal lymphoepithelioma.

Lymphoepithelioma metastatic to the skin — “Lymphoepithelioma” is a primary tumour of the nasopharynx. Epstein-Barr virus is usually integrated in these nasopharyngeal tumours and this can be performed using in situ hybridisation.