What is protein-energy malnutrition?

Protein-energy malnutrition (PEM), also called protein-energy undernutrition, is due to insufficient intake or absorption of protein, energy, and micronutrients to meet metabolic demand. It may also develop in the setting of excess nutrient loss. Acute PEM is a clinical spectrum with kwashiorkor and marasmus at either extreme.

Who gets protein-energy malnutrition?

Primary protein-energy malnutrition is the result of low nutrient intake and is most common in pre-school children in developing countries. Kwashiorkor, first described by the paediatrician Cicely Williams in the 1930s, is often precipitated by infection or withdrawal of breast-feeding with weaning onto maize porridge. It most often affects children in regions with diets high in rice, maize, yams, and sweet potatoes such as rural Africa, Pacific Islands, and the Caribbean.

Although globally PEM is becoming less common, the WHO estimates acute PEM affects more than 18 million children each year. It is increasing in Africa due to famine exacerbated by regional conflicts and displacement of populations. In developed countries, primary PEM can affect the elderly (elderly require more protein and less calories), haemodialysis, or as a feature of anorexia nervosa, food fads, and severe dietary restriction, child or elder abuse. Rice and almond milk, often used instead of cow’s milk in atopic children, are insufficient protein sources for children under the age of two years.

Kwashiorkor (malnutrition with oedema) occurs when calorie intake is adequate but protein intake is deficient, while the more common marasmus (severe wasting disease) is due to a deficiency of both protein and total calories. Mixed features are often seen (marasmic kwashiorkor, severe wasting with oedema).

The lack of dietary protein in protein-energy malnutrition leads to hypoproteinaemia, which decreases intravascular oncotic pressure, leading to an imbalance with capillary hydrostatic pressure and depletion of intravascular fluids, resulting in oedema.

Deficient energy levels, as seen in marasmus, initially trigger the breakdown of fat and muscle to create glucose, and ketone bodies in the later phase for energy, resulting in emaciation.

What are the clinical features of protein-energy malnutrition?

Early signs of protein-energy malnutrition in children include weight loss or poor weight gain, slowing of linear growth, fatigue, apathy at rest, and irritability when disturbed. Weight loss in adults may be masked by oedema. 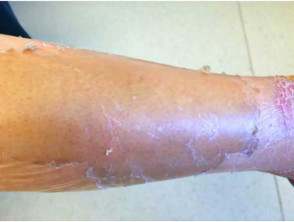 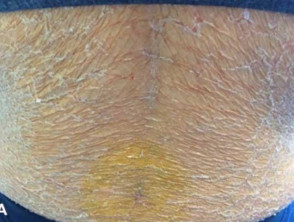 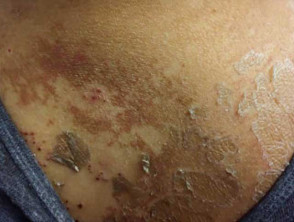 The cutaneous signs of protein-energy malnutrition are more common and more severe in patients with darker skin types.

What are the complications of protein-energy malnutrition?

How is protein-energy malnutrition diagnosed?

Skin biopsy classically shows epidermal pallor, although this may not always be noted.

A comprehensive workup is required including nutritional evaluation and investigations for underlying and associated conditions such as cystic fibrosis and HIV infection.

What is the differential diagnosis for protein-energy malnutrition?

What is the treatment for protein-energy malnutrition?

The treatment of protein-energy malnutrition is complex and must be done carefully to avoid refeeding syndrome which may result in death. The WHO has published a three-stage approach: resuscitation/stabilisation, nutritional rehabilitation, and recurrence prevention.

The first step is to replace fluids and electrolytes, and treat any associated infection. Macronutrient replacement is delayed 24–48 hours, ideally under the supervision of a specialist nutritionist. Micronutrient deficiencies may become apparent and can be avoided with early supplements.

The skin is treated with topical zinc paste and may benefit from oral zinc supplements.

What is the outcome for protein-energy malnutrition?

Protein-energy malnutrition in children has an overall mortality rate of 5-40%, depending on the availability of medical care and the speed with which the condition is recognised. Kwashiorkor has a more favourable outcome than marasmus.

Early treatment favours recovery, although growth potential will never be fully achieved. Delayed treatment may still reverse PEM, but physical and intellectual sequelae may not resolve, and death is more likely.

In older patients with other medical conditions, PEM has a profound effect on mortality, doubling the risk of death.