Sclerosing lipogranuloma usually presents as a painless or slightly tender, indurated mass on the penis, scrotum, spermatic cord and perineum. It is typically due to injection or topical application of oil based substances (paraffin, silicone, oil or wax) for cosmetic or therapeutic use.

In sclerosing lipogranuloma, the histopathology shows fat necrosis, histiocytes, giant cells with extensive fibrosis and hyalinization. There are polymorphous vacuoles of the foreign material and pseudocysts where there is more extensive accumulation of material (figures 1,2). 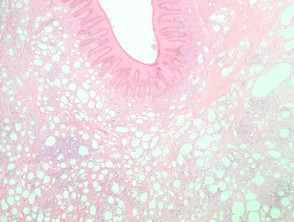 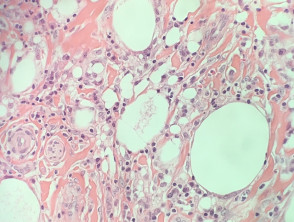 None are generally needed. Oil Red O for frozen tissue is positive but rarely used.