Liposarcoma is the most common malignant soft tissue sarcoma. These are typically deep seated tumours encountered in the skin/subcutis by direct invasion. Rare dermal and subcutaneous tumours have also been described.

Liposarcoma are fat-producing tumours that have a spectrum of morphologies.

Well-differentiated liposarcoma shows features similar to lipoma, with a mixture of normal-appearing adipocytes intermixed with atypical adipocytes (figures 1,2). The atypical cells are hyperchromatic, pleomorphic and irregular. In addition, lipoblasts are commonly found – these have a multivacuolated cytoplasm in which the vacuoles dent the atypical nucleus (figures 3, 4). Less common well differentiated liposarcoma exist, including a sclerosing variant (figure 5).

Pleomorphic liposarcoma may be may be difficult to recognize as being lipomatous in origin (figures 6, 7). These are composed of frankly atypical mesenchymal cells often with numerous mitoses and necrosis. 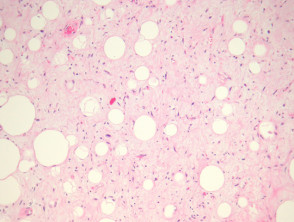 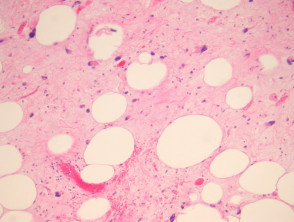 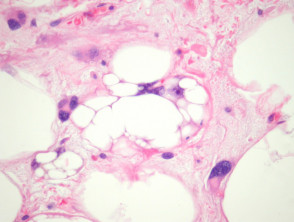 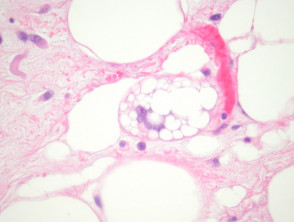 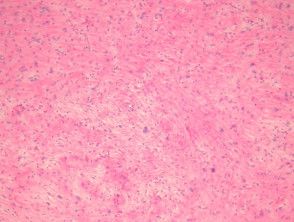 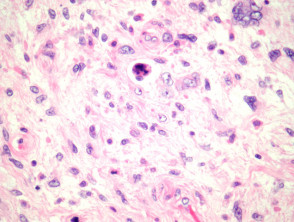 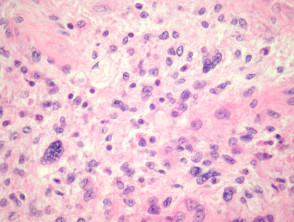 Immunohistochemistry for MDM2 and, to a lesser extent, CDK2 are positive in liposarcoma. Molecular techniques (usually FISH or PCR) are also widely used.

Lipoma — Well differentiated liposarcoma may be exceedingly bland. Lipoblasts, mitoses and ancillary studies for MDM2 and CDK2 can be very helpful. It should be remembered that primary dermal/superficial subcutis liposarcoma is very rare.

Other sarcomas — Identification of fatty differentiation is helpful in distinguishing liposarcoma from other sarcomas. Extensive sectioning of undifferentiated sarcomas is recommended to exclude focal areas of lipomatous differentiation. MDM2 molecular studies are helpful diagnostic adjuncts.