Angiolipoma is a relatively common benign subcutaneous lesion. They often occur in multiplicity. As no genetic abnormality has been found many believe it is best considered a hamartoma rather than a true neoplasm.

Sections through angiolipoma show nonseptate fat with peripheral congeries of small capillaries (figure 1). Some of the capillaries are plugged with fibrin thrombi (figure 2).

Sometimes, there are only rare adipocytes admixed with numeous capillaries (“cellular angiolipoma”). 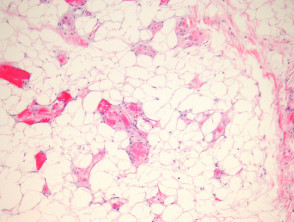 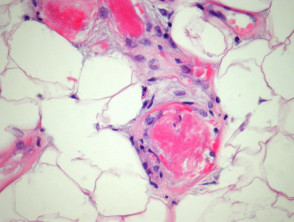 Cellular lesions and angiolipomas with massive intravascular thrombosis may be confused with rarer vascular lesions (such as kaposiform haemangioendothelioma).