What is Sister Mary Joseph nodule of the umbilicus?

This eponymous term refers to secondary cancer (metastasis) appearing in the umbilicus, usually spreading from advanced peritoneal adenocarcinoma. The name first was used in Hamilton Bailey's textbook of surgery in 1949.

Who was Sister Mary Joseph?

Sister Mary Joseph was a Catholic nurse who worked with the Mayo brothers at St. Mary's Hospital in Rochester Minnesota from 1890 to 1915. They were the surgeons who later established the world famous Mayo Clinic.

Sister Joseph made the astute observation that her patients with terminal carcinoma sometimes developed red papular lesions in the umbilicus. William Mayo and herself published an article concerning this in 1928. 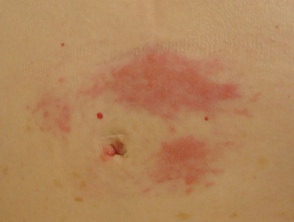 The illustration is of a 70 year old lady who presented with some irritation and papules within the umbilicus and patchy erythematous areas on adjacent skin (lymphangitis carcinomatosa).

What kind of cancer is responsible?

Most patients have gastrointestinal malignancy – gastric, colonic or pancreatic. Some primaries are ovarian or uterine. In about 15% of patients no primary cancer can be found.

The metastases reach the umbilicus via direct peritoneal spread or possibly via lymphatics that run beside the obliterated umbilical vein or planes within remnant structures (urachus and vitelline duct).

In a quarter of cases the umbilical lesion is the first manifestation of malignancy.

A skin biopsy of the nodule should be performed.

Histologically most tumours are adenocarcinoma and the likely origin may be suggested by histochemical stains on the biopsy and tumour markers such as CEA. 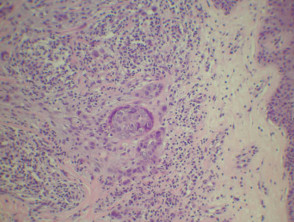 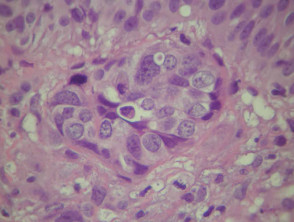 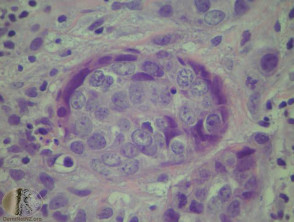 What is the prognosis?

The prognosis is poor because there are usually metastasis elsewhere in the abdomen and elsewhere. Most patients have died of their disease within one year.