Plasma cell disorders usually present as persistent, well-defined irritable red patches on the genitals. Plasma cell balanitis affects the glans of the penis. Plasma cell vulvitis is most commonly found on the inside of the vulva at the entrance to the vagina (vestibule or introitus).

In Zoon balanitis/vulvitis, sections show mucosa which may be attenuated or eroded overlying a dense stromal infiltrate (figures 1,2). The infiltrate contains numerous plasma cells which often form sheets. There may be fewer eosinophils and neutrophils. Vascular ectasia and extravasated erythrocytes are common (figures 1,2,3). 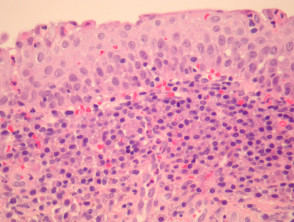 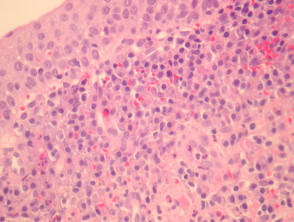 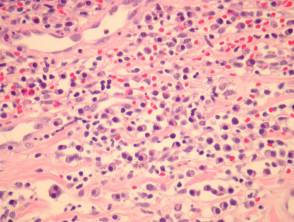 Plasma cells may be seen in various infectious diseases, most notably syphilis. Special stains and serology can be helpful if an infection is suspected clinically.