The identification of many skin tumours is fairly straightforward, but the diagnosis of some tumours (particularly some melanocytic tumours) can be very difficult. Tumours do not always have textbook appearances. On occasions even experts disagree as to whether a melanocytic lesion is benign or malignant. Sometimes malignant lesions show no obvious histological features to suggest their cell type i.e. they become anaplastic. Special stains especially immunoperoxidase stains can be useful in such cases.

The pathology of the following skin tumours will be outlined:

The histological features of seborrhoeic keratoses may be quite varied and can overlap with solar lentigo, but typically show:

Various descriptive terms may be used, but there are four main types (more than one pattern may be present in any one tumour).

The histological features of basal cell carcinoma are typically: 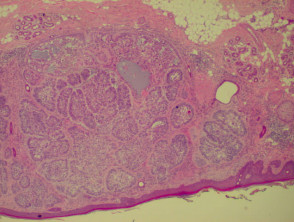 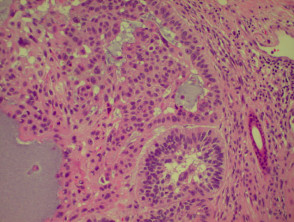 The histological features of actinic keratoses are: 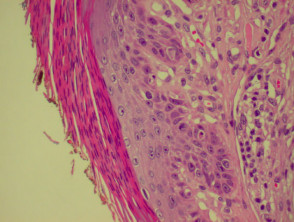 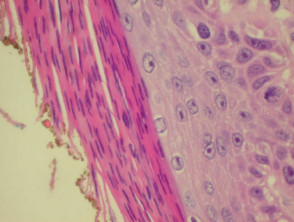 The histological features of in-situ squamous cell carcinoma show extensive overlap with actinic keratosis and are: 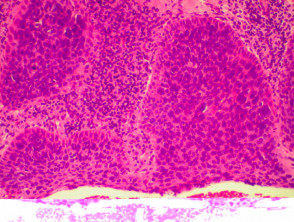 Pathology of in situ SCC

SCC is characterised by proliferation of irregular nests of abnormal squamous cells arising from the epidermis and invading the dermis. Tumours are traditionally divided into well, moderately or poorly differentiated tumours by a subjective assessment of how significantly the tumour cells differ from normal keratinocytes. In general, the greater the degree of keratinization, the better differentiated the tumour is thought to be. Except in the case of very poorly differentiated tumours, this does not have a great bearing on prognosis. More important is the depth and irregularity of invasion, particularly the presence of perineural infiltration, which is associated with a much higher rate of recurrence if not widely excised. The site of the lesion is also important; tumours of the lips and ears have a considerably higher rate of metastasis to lymph nodes.

There are several descriptive variants of SCC including spindle cell SCC and acantholytic (or adenoid or pseudoglandular SCC). These mainly are of note due to the difficulty of diagnosing the tumour as SCC, but they may also imply a slightly worse prognosis. A further rare variant is verrucous carcinoma, a lesion in which the histology has a deceptively benign appearance in that there is very little cytological abnormality. Diagnosis in these cases may be delayed and the diagnosis may not be made until several biopsies have been performed. These tumours recur locally, but do not generally metastasise.

From the above comments it can be seen that the histological features of SCCs can vary, but in general are: 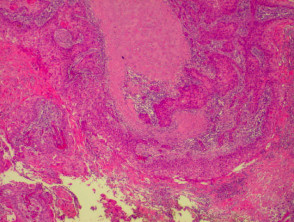 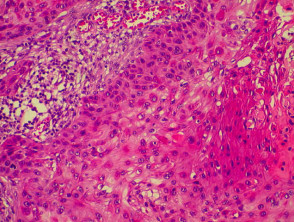 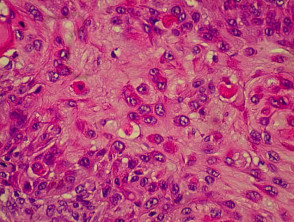 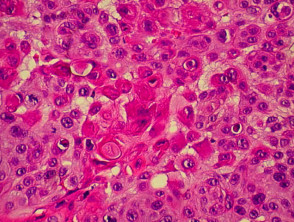 A cyst is a walled-off cavity filled with keratin, mucin or fluid. Cysts may become acutely inflamed, in which case there is a marked neutrophil infiltrate, or rupture can result in a surrounding granulomatous infiltrate.Link ta clinical description of cysts.

The histological features of epidermal inclusion cysts (epidermoid cysts) are:

Pilar cysts, which are typical of scalp ‘sebaceous cysts’, show: 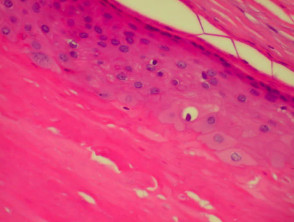 A lentigo is a flat brown patch (freckle). Strictly, a lentigo shows increased basal melanocytes, while a freckle (ephelis) shows increased pigmentation but no increase in melanocytes. It is sometimes very difficult to tell the difference histologically, and many pathologists refer to all such lesions as lentigo. Subtypes include lentigo simplex and solar lentigo, and can be hard to distinguish from flat seborrhoeic keratoses. Link ta clinical description of brown marks and freckles.

The histological features of lentigines are:

The melanocytic naevus or mole has considerable clinical and histological variability. Subtypes include junctional, compound, intradermal, congenital, dysplastic, blue and halo naevi. The subtypes are determined by the site and type of the naevus cells in the skin, and there is some correlation with the age of the patient. While these subtypes are largely descriptive congenital and dysplastic naevi can provide prognostic information. Link ta clinical description of melanocytic naevi.

The histological features of melanocytic naevi are: 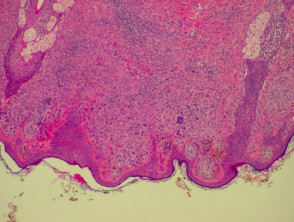 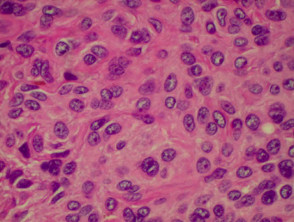 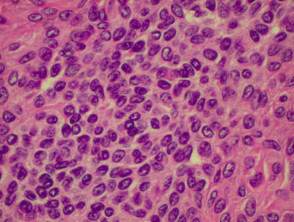 Histological variants of melanoma roughly parallel the clinical variants, but there are some differences, which may lead to misunderstandings. Histological categorization is based on the appearance of the in-situ component of the lesion (i.e. the non-invasive element of the tumour in the epidermis).

Histological types of invasive melanoma are show in the table below.

The histological features of melanoma differ, depending on the type of tumour, but in general terms show: 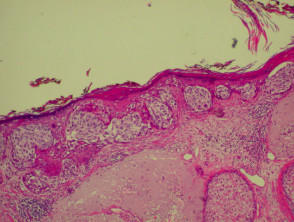 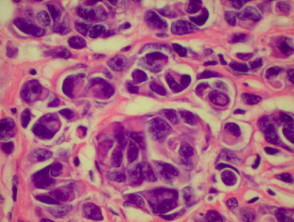 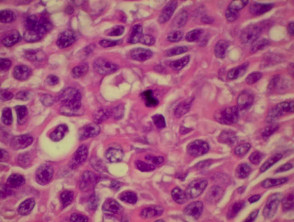 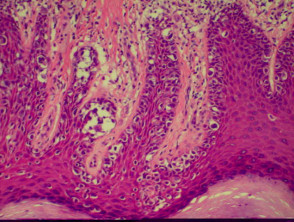 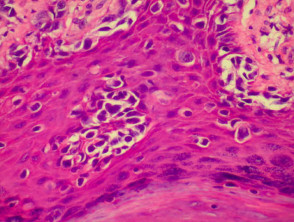 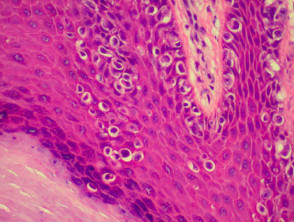 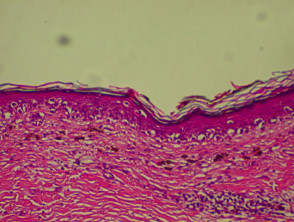 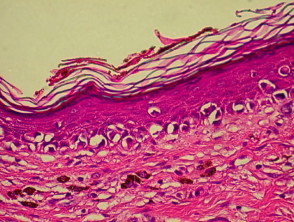 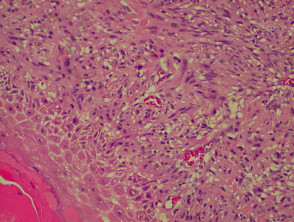 The prognosis of melanoma is very dependant on the stage at which the lesion is excised. Most lesions are confined to the primary site at presentation, but the prognosis of these can be stratified by microstaging, based upon the microscopic appearances. Two methods are generally employed, the Breslow thickness and the Clark levels. Both systems have their adherents, but the Breslow thickness has been found to be more reproducible between observers, and correlates more directly with prognosis.

Tumour thickness in mm and the presence of ulceration are the two features required for staging the primary melanoma. Other features with prognostic significance that are also looked for in the melanoma include the degree of tumour infiltrating lymphocytes and the number of mitoses.

Mycosis fungoides is the most common form of CTCL and has several stages including patches, plaques and tumours. In early patch stage disease, it may not be possible to make a histological diagnosis of MF, and repeat biopsies as the disease progresses may be required, even when the clinical suspicion is strong.

The histological features of mycosis fungoides include:

The histological features of dermatofibroma are:

This is a tumour that has conflicting clinical and histological features. Clinically, this is a tumour of the elderly arising in sun damaged skin. Histologically, there is severe nuclear atypia with many mitotic figures and features of a sarcoma located in the superficial and mid dermis.

The histological diagnosis is one of exclusion following immunohistochemistry, as spindle cell squamous carcinomas, melanomas and leiomyosarcomas may all appear similar. It is possible that this lesion's good prognosis is simply due tits superficial location, rather than its cell of origin, but the features are well recognised and the prognosis well documented so that its retention as a specific entity appears justified. 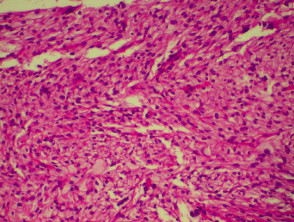 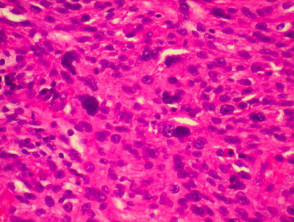 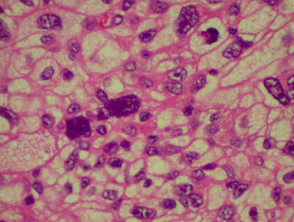 Examine a histopathology report of melanoma. What prognostic criteria are described? Refer to: Clinical Guidelines on the Management of Melanoma in Australia and New Zealand .