Pathological changes may arise in epidermis, dermis and/or subcutaneous tissue. The pattern of changes may allow a diagnosis to be made or it may be non-specific. The appearance of many skin diseases vary at different stages of their development and may be altered by attempted treatment and secondary changes such as scratching or infection.

Understanding the terminology used in describing pathological changes in the skin will help interpret pathology reports. The reporting pathologist will generally make or suggest a diagnosis or possible diagnoses, but it is especially important in inflammatory conditions that the report be correlated with the clinical features. If the clinical and pathological diagnoses do not tally, the case should be discussed with the pathologist to arrive at a consensus diagnosis (or to at least agree that a definite diagnosis is not possible at this stage).

The pathology of the following skin diseases will be outlined. 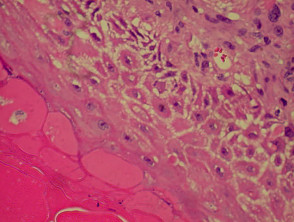 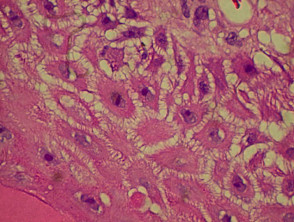 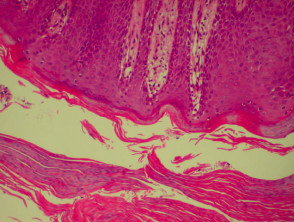 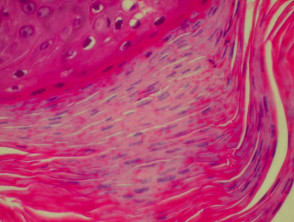 There are two main schools of thought as to how inflammatory dermatoses should be described, but both are essentially a means to categorise changes into recognisable overall broad tissue reaction patterns, and then home in on more subtle changes to arrive at a diagnosis. One is based largely around the epidermal changes (spongiotic, lichenoid, psoriasiform or bullous), while the other identifies the basic pattern of inflammatory cell infiltration (superficial perivascular, superficial and deep perivascular, diffuse dermatitis, nodular dermatitis, and vesicular). Both systems have their merits, and many dermatopathologists use a combination of both.

Common skin diseases have characteristic microscopic appearances. A biopsy is often not necessary in typical cases because a diagnosis may be made clinically. In less typical cases, the pathology may be very helpful. However histological diagnosis is not always specific in these cases because the numerous inflammatory skin diseases have overlapping features, and the appearances may be markedly altered by attempts at treatment and the chronicity of the condition.

A number of skin diseases are referred to as eczematous, in which there is diffuse ill-defined scaling and itching. Swelling and blistering may arise in acute eczema. Eczema or dermatitis are often synonymous. Link to a clinical description of dermatitis.

The histological features of eczema are: 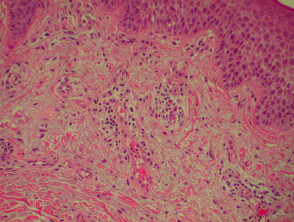 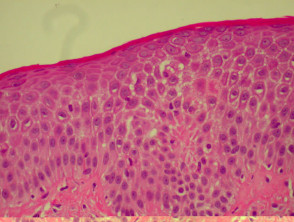 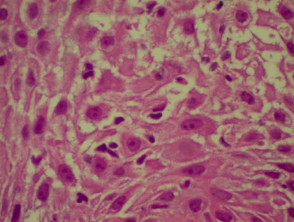 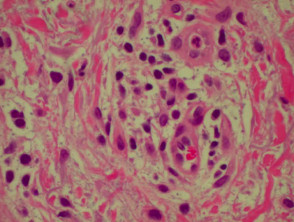 There are various subtypes of psoriasis, a common dermatosis with well-demarcated erythematous scaly plaques. Link to a clinical description of psoriasis.

Due to the dynamic nature of psoriasis, this disease frequently does not show all classical histological features, but the typical changes of chronic plaque psoriasis are: 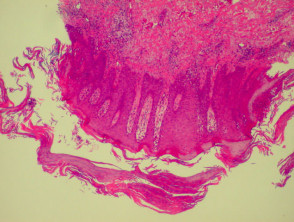 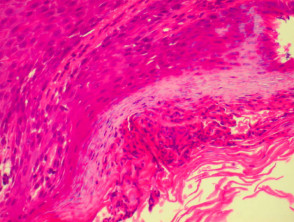 Lichen planus is the idiopathic version of a group of lichenoid disorders characterised by scaling papules or plaques. Link to a clinical description of lichen planus.

The histological features of lichen planus are:

The majority of lymphocytes in the often dense infiltrate are memory cells, identified using histochemistry by positive CD8 and CD45 RO markers.

Direct immunofluorescence nearly always reveals fibrinogen within the colloid bodies. Occasionally IgM and complement are also detected. The immunofluorescence pattern is not diagnostic as the same reactants can also be seen in systemic lupus erythematosus and erythema multiforme. 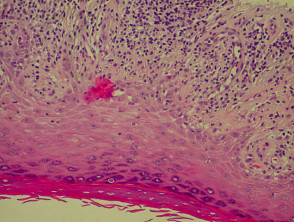 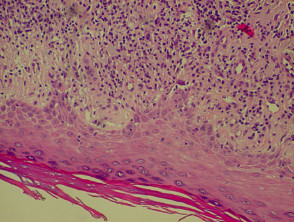 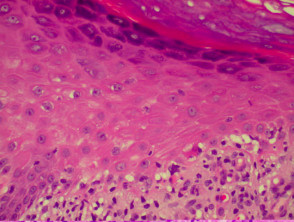 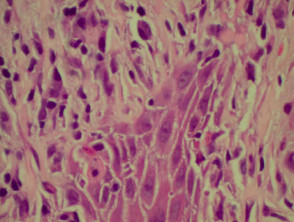 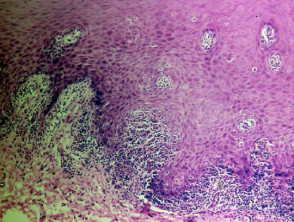 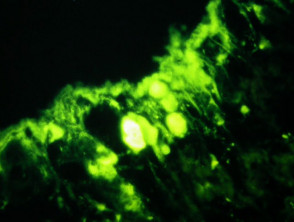 The histological features of bullous pemphigoid are:

Direct immunofluorescence reveals IgG and complement deposits in the basement membrane zone. (Biopsies for fluorescence should ideally be taken from erythematous but not yet bullous areas.) Indirect immunofluorescence will detect circulating antibodies. ELISA will be positive to 180 and 230kd BP antigens 2 and 1 respectively. Using skin separated by a salt splitting process, immunoreactants are seen to bind to the roof of the blister. 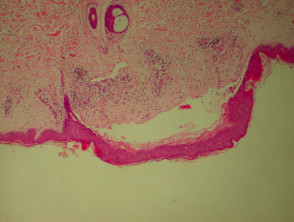 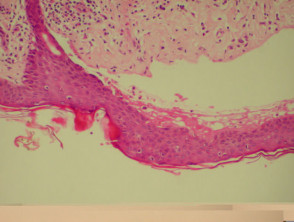 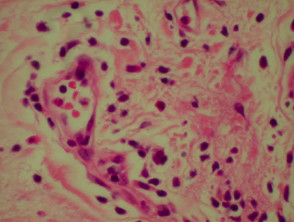 Systemic vasculitis may affect the skin and vascular damage may be the main feature or a secondary feature in several skin diseases. Link to a clinical description of cutaneous vasculitis.

The histological features they have in common are: 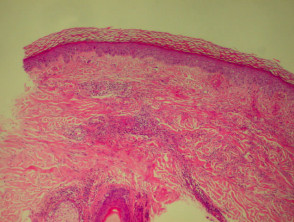 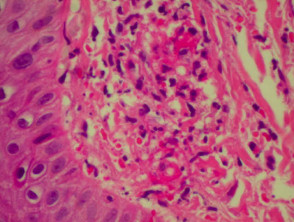 The histological features of granuloma annulare are:

Acne is a special form of folliculitis. Link to a clinical description of acne.

The histological features of acne are:

General pathologists and experienced dermatopathologists report what they see. Their job is easier if a trained and experienced specialist dermatologist provides them with a good history and clinical differential diagnosis and carefully selected large skin biopsy. However many histology reports are from poor samples with inadequate clinical information.

Inflammatory dermatoses may be localised or generalised but a biopsy only provides the pathologist with a small sample, which may not be representative of the disease as a whole.