Classification of acne in children

Prepubertal acne has been classified into the following age groups by a panel convened by the American Acne and Rosacea Society [1]. 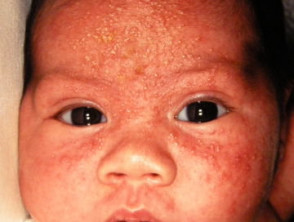 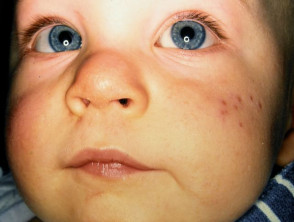 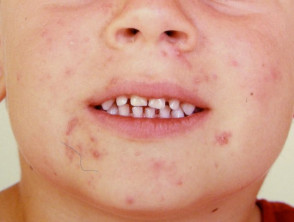 Neonatal acne is estimated to affect 20% of newborns. Neonatal acne takes the form of comedones (whiteheads and blackheads) that extend from the scalp, upper chest, and back, and inflammatory lesions (erythematous papules and pustules) on the cheeks, chin, and forehead. Neonatal acne can be mistaken for neonatal cephalic pustulosis (shown above).

Neonatal acne does not usually result in scarring. It is more likely to affect boys more than girls, at a rate of 5:1.

Infantile acne is rare. It occurs in infants up to 16 months of age and presents as comedones, papules, pustules, and occasional nodules. It predominantly affects the cheeks. Occasionally, it leaves scarring.

Infantile acne can rarely persist until puberty, but it is not associated with underlying endocrine abnormalities. Male infants are affected more often than girls, at a rate of 3:1.

Acne in this age group is very rare. An endocrinologist should be consulted to exclude possible hyperandrogenism.

Preadolescent acne — 7–12 years (or up to menarche if female)

Acne can be the first sign of puberty, and it is common to find acne in this age group.

What causes acne in children?

Neonatal acne is thought to be a result of hyperactive sebaceous glands responding to neonatal androgens and maternal androgens that have crossed through the placenta. Androgen levels wane after approximately 1 year. At around 7 years of age, androgen production restarts, with the onset of adrenarche.

From birth to around 12 months of age, luteinising hormone levels are similar to those during puberty. In males, this results in increased testosterone production and may explain the higher incidence of acne in boys of this age compared to girls.

Sebum production leads to increased colonisation of the hair follicles by the acne bacteria, P. acnes, and, as in adult acne, this results in follicular obstruction by sebum and keratin debris, and to inflammation.

How is acne in children diagnosed?

The majority of children with acne will not require further investigations.

However, if the findings on a clinical history and examination in children aged 1–6 years old indicate that further investigation is required, or if the acne is severe or unresponsive to treatment, an endocrinology referral may be required. The levels of the following hormones should be measured:

What is the treatment for acne in children?

Treatment for children with acne is generally the same as for adults with acne, with the exception of restrictions by age for tetracyclines. All treatments take at least 1–2 months to result in significant improvement.

Avoid greasy emollients, hair pomades, and the use of comedogenic products on the affected area.

Benzoyl peroxide is a topical antiseptic and is available as a wash, gel, or lotion that can be bought over the counter. It can be used alone for mild acne or in combination with oral therapy for more severe cases.

Benzoyl peroxide should be applied to all the areas affected by acne. If the skin is particularly sensitive, benzoyl peroxide treatment can be started at a low concentration of 2.5%, as higher concentrations are more likely to cause dryness and irritation.

Topical retinoids are creams, lotions, and gels enriched with a derivative of vitamin A (eg, tretinoin and adapalene). If the skin is sensitive, an oil-free moisturiser or sunscreen can be added.

A topical retinoid should be applied to the whole of the affected skin. It is often initially used 2–3 times a week, and applications are increased to daily, as tolerated, if there is no improvement in the acne.

Topical retinoids are also available in combination with benzoyl peroxide or a topical antibiotic.

The treatment for children with moderate acne is 250–500 mg of the oral antibiotic, erythromycin, in single or split dosing. Erythromycin is best used in combination with a topical regimen, such as benzoyl peroxide and/or a topical retinoid, to reduce P. acnes resistance.

Trimethoprim and combined trimethoprim and sulphamethoxazole, have both been used if there is bacterial resistance to erythromycin or if erythromycin is contraindicated due to adverse effects. Doxycycline and minocycline should be used only in children over 12 years of age.

Isotretinoin is sometimes used in moderate acne when antibiotics and topical therapy have been unsuccessful.

The treatment of severe acne is the same as for moderate acne. Isotretinoin can be prescribed if there is an inadequate response to oral antibiotics.

Doses of isotretinoin ranging from 0.2 to 1 mg/kg/day have been used safely in infants from 5 months of age and in children with severe acne. The isotretinoin capsules can be frozen to make it easier to divide them into halves or quarters, and freezing can help mask the unpleasant taste.

Premature epiphyseal closure is a theoretical concern with isotretinoin, but this has only been reported once when isotretinoin was used to treat acne in a 14-year-old boy at a dose of 0.75 mg/kg/day.

Deep nodules can be treated by injections with low-concentration intralesional triamcinolone acetonide at a dose of 2.5 mg/mL.