During pregnancy, the severity of acne can improve or get worse. It is common for acne to get a bit worse in early pregnancy and for it to improve as pregnancy progresses. This may relate to the increased levels of oestrogen present in pregnancy.

A few women have severe flares of acne throughout pregnancy. 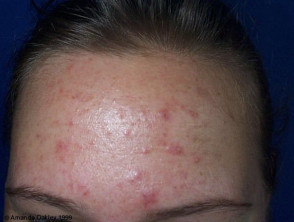 Treatment of acne in pregnancy

On the whole, it is preferable to avoid drugs in pregnancy in case they have an effect on the fetus.

Which treatments are safe during pregnancy?

The absence of safety data can make it difficult to advise on treatment of acne in pregnancy. Most experts agree that topical treatments that can be used safely in pregnancy include:

Light and laser therapies for acne are also safe.

Which treatments are unsafe during pregnancy?

The following drugs must be avoided in pregnancy or if pregnancy is being contemplated.

Do not use topical preparations containing:

Do not take the following oral medicines: