The 2019 update of this article was supported by Johnson and Johnson Australia, distributors of the Neutrogena Visibly Clear™ Light Therapy Acne Mask in New Zealand and Australia. Sponsorship does not influence content.

Lasers and light for acne treatment 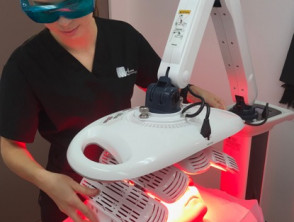 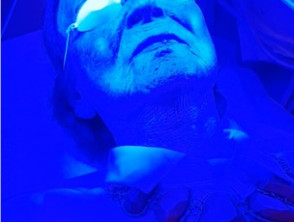 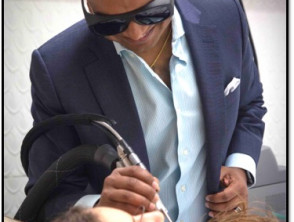 Light therapy for the treatment of acne

Light therapy uses particles at a non-thermal intensity to alter the biological activity of the skin at different levels. Low-level light therapy is usually applied via light-emitting diodes (LEDs) as red or blue light. Varying wavelengths of light penetrate to different depths within the skin, with wavelengths of 390–600 nm reaching superficial layers and wavelengths of 600–1100 nm penetrating the deeper layers. Low-level light therapy is safe, and patients experience minimal discomfort. It typically involves exposing the skin affected by acne to either continuous or intense pulsed light (IPL) on several occasions, often in conjunction with topical or oral acne medications.

Blue light therapy has wavelengths 415–545 nm and penetrates approximately 0.3 mm into the skin. Cutibacterium acnes (formerly Propionibacterium acnes), the main bacterium involved in the pathogenesis of acne vulgaris, produces large amounts of intracellular porphyrins, the most abundant of which has a peak absorption at 415 nm. Blue light excites these porphyrins, leading to the production of reactive oxygen species and subsequent bacterial destruction. Blue light also has anti-inflammatory effects through the modulation of cellular inflammatory mediators.

How does blue–red light treat acne?

Blue–red light uses low-level light therapy in both blue (415 nm) and red (650 nm) wavelengths. Multiple studies have shown it is well tolerated and effective through a reduction in inflammatory and non-inflammatory acne lesions and is superior to blue light alone [3]. The mechanism is thought to be synergistic in applying the antibacterial and anti-inflammatory actions of both wavelengths of light acting at different depths within the skin. Blue–red light is safe in pregnancy. Some patients may experience a deterioration of their acne with blue–red light therapy, and its side effects can include dryness, itch, a rash, and headaches.

Home light therapy devices consist of wearable masks that use low-level light therapy as an LED-based, non-thermal, non-ablative treatment. Currently approved devices on the market use blue–red light and are approved for mild to moderate facial acne. These devices are typically smaller than in-office LED devices and thus may require extended treatment sessions for a therapeutic effect. They have been shown to reduce inflammatory and non-inflammatory acne lesion counts and reduce the size and sebum production of sebaceous glands [4]. A recent trial compared a blue–red light therapy mask with and without topical salicylic acid against topical benzoyl peroxide for mild to moderate acne vulgaris. The trial found a 24.4% improvement in inflammatory lesions and 19.5% improvement in non-inflammatory lesions in patients using the light mask, concluding this to be a safe and effective therapy for mild to moderate acne [5]. 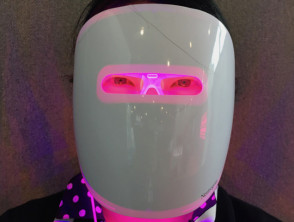 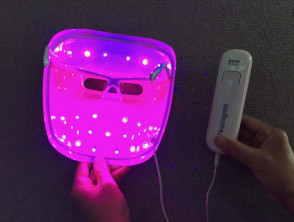 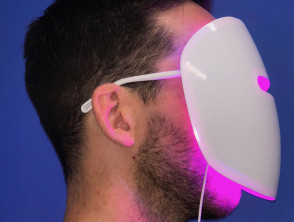 Photodynamic therapy for the treatment of acne

Photodynamic therapy (PDT) is an effective treatment for acne and can significantly decrease its severity with regular treatments. PDT involves the application of a photosensitiser (a porphyrin chemical) before exposure to a light source. The effect of the light is amplified by the photosensitiser. The most common photosensitisers are aminolevulinic acid and methylaminolevilunate. Indocyanine green and indole-3-acetic acid can also be used.

The optimal light source, photosensitiser, and incubation time are unclear. The evidence that PDT is useful in the treatment of acne is positive but limited [6].

How does photodynamic therapy treat acne?

PDT utilises a photosensitiser taken up by the pilosebaceous unit (the hair follicle and its associated oil gland) and undergoes metabolisation to cause oxidative stress and free radicals, which destroys C. acnes and modulates the sebaceous gland [7].

Side effects of photodynamic therapy include:

Laser therapy for the treatment of acne

Lasers have a well-established role in managing acne scarring. However, they are increasingly being used to treat active acne vulgaris.

IPL devices emit a spectrum of wavelengths between 400 and 1200 nm. This allows multiple chromophores to be activated with one light exposure. Pulse duration, wavelengths, and pulse intervals can all be adjusted with cut-off filters to enable the tailoring of treatments to a patient’s specific skin type and condition. To date, there is conflicting evidence regarding its effectiveness in treating acne. IPL in combination with a photosensitiser is superior to IPL alone [8].

Side effects of IPL can include:

The contraindications to IPL treatment are:

IPL has a photodynamic effect. Ultraviolet and visible light are absorbed at peak wavelengths by porphyrins that are produced by C. acnes. This has a bactericidal effect, causing the release of reactive oxygen species. It may also work by selective photothermolysis of the blood vessels supplying sebaceous glands, reducing the sebum secretion rate. IPL can be used with a topical photosensitiser that accumulates in the sebaceous glands; the light activation of the photosensitiser then causes the destruction of the glands [9].

The 585–595-nm pulsed dye laser (PDL) uses an organic dye as the laser solution and targets oxyhaemoglobin (the result of haemoglobin combining with oxygen) to cause the heating and photothermolysis of dilated vessels within inflammatory acne lesions. The mechanism of action is likely multifactorial. PDL potentially also has a photochemical effect on porphyrins produced by C. acnes causing a phototoxic effect [2]. Studies have not shown a reduction in sebum production with its use; however, the upregulation of the potent anti-inflammatory mediator transforming growth factor-beta and inhibition of CD4+ T-lymphocyte-mediated inflammation suggest an anti-inflammatory mechanism [10]. PDL has been used predominantly in the treatment of vascular skin lesions and atrophic scarring, and it is increasingly being used in the treatment of acne vulgaris, particularly for patients with acne-induced facial erythema.

PDL is often used in conjunction with topical photosensitisers. It can improve the severity and number of inflammatory lesions in acne. The side effects of PDL have somewhat limited its usefulness. These include:

Infrared lasers can penetrate deeply into the dermis to target water within the sebaceous glands. This is thought to cause thermal coagulation of the sebaceous glands, arrest sebum production, and thereby reduce acne. The 1450-nm diode and 1540-nm erbium glass lasers have been studied for acne treatment.

The 1540-nm erbium glass laser improves inflammatory acne through non-selective heating of the sebaceous glands. Small studies have shown a 68–82% reduction in acne lesions, with the effects sustained at 24 months' follow-up [11]. This particular laser has very few reported side effects.

The 1450-nm diode laser heats the upper mid-dermis, causing thermal coagulation of the sebaceous lobule and follicular infundibulum, reducing the activity of sebaceous glands [12]. Some studies have shown a reduction in sebum production while others have not. The 1450-nm diode laser does appear to reduce lesion counts in several small trials, but the considerable side-effect profile of significant pain and discomfort, dryness and erythema has led to this laser falling out of favour with many dermatologists.

The  neodymium-doped yttrium aluminium garnet (Nd:YAG) is a crystal used most commonly in a 1064-nm laser that can penetrate deeper layers within the dermis, causing diffuse dermal heating while limiting epidermal damage [13]. Although its mechanism is not entirely defined, it probably treats acne by reducing inflammation and sebum production. This laser has been more extensively studied in the treatment of acne scarring; however, there is emerging evidence for its use in the treatment of active acne.

Nd:YAG appears to be a useful treatment modality for active acne vulgaris, although further high-quality studies are still required. Treatments are safe, with possible side effects including skin redness, tenderness, and dryness [1].

The potassium titanyl phosphate (KTP) 532 nm laser emits a green light pulsed beam that penetrates deeper than blue light, and it is used predominantly to treat telangiectasia and rosacea. The KTP laser activates porphyrins that target C. acnes to cause thermal damage to sebaceous glands [2]. Limited data support its use in active acne; however, several small studies have shown a transient reduction in acne lesion count (21–36%) [14]. The side effects of KTP laser treatment include transient crusting, oedema, and erythema.