Focal acral keratosis is a variant of the same disorder in which there are keratin abnormalities but elastic tissue is normal on histopathological examination. 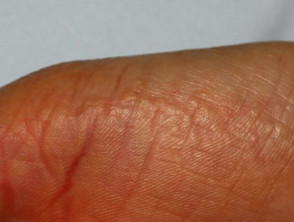 Who gets acrokeratoelastoidosis and why?

Acrokeratoelastoidosis is a rare genetic skin disorder with autosomal dominant inheritance patterns (if one parent is affected there is a 50% chance that each child will be affected). Sporadic cases have also occurred.

Acrokeratoelastoidosis usually starts in childhood, adolescence or early 20s, and appears to affect females more frequently than males.  It can occur in skin of colour, with most reports of focal acral keratosis occurring in dark skin.

The precise cause of acrokeratoelastoidosishas not yet been determined. A possible linkage to chromosome 2 has been proposed.

What are the signs and symptoms of acrokeratoelastoidosis?

Signs and symptoms of acrokeratoelastoidosis start to arise at around puberty or sometimes later. Small clusters of skin-coloured or yellowish papules slowly develop over the sides of the hands and feet. The papules are about 2–5 mm in diameter, roundish, discrete, and firm on palpation.

How is the diagnosis of acrokeratoelastoidosis made?

In most cases, acrokeratoelastoidosis is a clinical diagnosis determined by age of onset, family history, absence of other signs of sun damage, and findings on skin biopsy.

What is the treatment for acrokeratoelastoidosis?

Because acrokeratoelastoidosis is a genetic disorder, no cure is available. Treatment is also not indicated as in most patients, once developed, the eruption is stable and causes no problems. Mild keratolytics such as urea cream have been used to relieve any dryness.