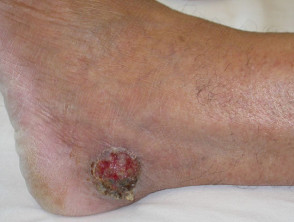 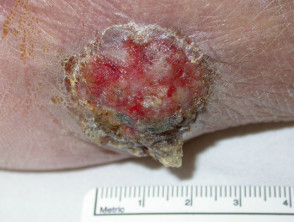 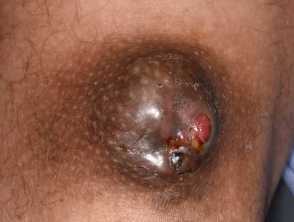 There is no predilection for any racial group. Eccrine porocarcinoma mainly occurs in the elderly, with about equal incidence in both sexes. Unlike the more common forms of skin cancer, it is unrelated to sun exposure.

How does eccrine porocarcinoma present?

Eccrine porocarcinomas are typically slow-growing tumours. It can take many years before a diagnosis is made because eccrine porocarcinoma can mimic other skin conditions. It is often misdiagnosed as seborrhoeic keratosis, pyogenic granuloma, viral wart (verruca) or squamous cell carcinoma.

The most common presentation is that of an ulcerated, red, dome-shaped nodule with a shiny surface. It can also present as a wart-like plaque.

Eccrine porocarcinoma is most often diagnosed on the lower legs or feet, but may also affect the trunk and head. Surprisingly, it is not common on the palms or soles, despite these being areas with high concentration of eccrine glands.

Eccrine porocarcinoma does not often cause symptoms but some patients complain of bleeding or itch. 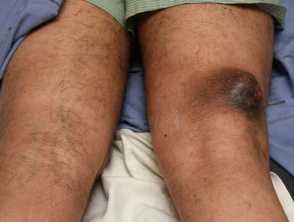 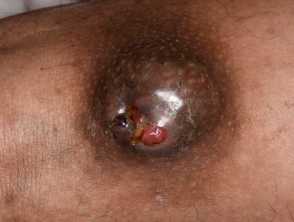 How is eccrine porocarcinoma diagnosed?

The only way to be sure of the diagnosis is to take a biopsy of the tumour. Eccrine porocarcinoma has very characteristic features under the microscope. Also, there are several microscopic features that the pathologist should look for to help predict the prognosis.

What is the treatment for eccrine porocarcinoma?

Eccrine porocarcinoma can be aggressive and is known to metastasise or spread to other organs of the body, causing death. The tumour cells commonly disseminate via the lymphatic vessels. Hence the physician should examine the regional lymph nodes.

Primary treatment consists of excising the tumour. The specimen should be sent to the laboratory to ensure that its margins are clear of malignant cells. Surgery is curative in up to 80% of cases. However, about 20% of patients will have local recurrence and metastases.

In some instances, a local lymph node is biopsied (sentinel node biopsy) but whether or not this influences long-term survival is unknown.

Radiotherapy, chemotherapy and acitretin have been employed against metastatic Eccrine porocarcinoma with varying degrees of success.