Sections of an epidermoid cyst show a cystic structure occupying at least the upper dermis but larger lesions may grow to involve the entire dermis (figure 1). They are usually unilocular but are rarely multilocular. The lining of the cyst is composed of an epithelium which is flattened and contains a granular layer of keratohyaline granules (figures 2, 3). The cyst lining is similar to the surface epithelium but lacks rete ridges which are seen in the overlying epidermis (figure 4, arrow).

Foci of rupture are common and the keratin exposed to the adjacent dermis elicits a neutrophilic and then granulomatous reaction (figures 5, 6).

Massive rupture may result in complete destruction of the lining and a marked inflammatory reaction which resolves in scarring.

The keratin contained in the cyst is lamellated and acellular (figure 7).

A vast range of epidermal changes has been described in the lining epithelium. 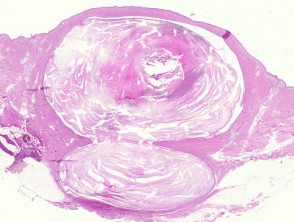 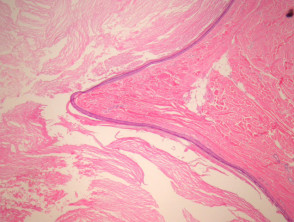 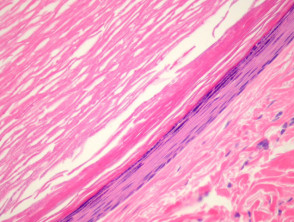 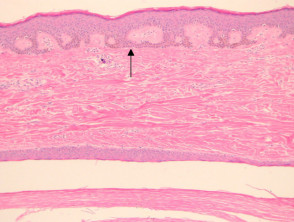 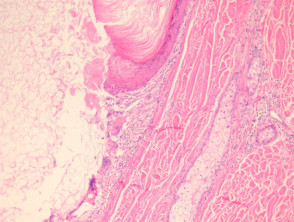 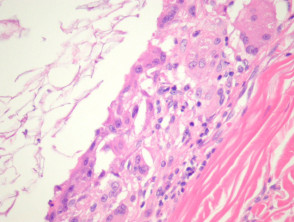 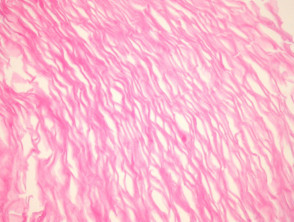 Human papillomavirus (HPV)-related epidermal cysts – These have a hyperplastic lining with viropathic nuclear and cytoplasmic changes.

Trichilemmal cysts – These have a lining which resembles the inner root sheath with an attenuated granular layer and abrupt keratinisation which is adherent to the epithelium.

Cystic squamous cell carcinoma must be considered if there are nuclear atypia and adjacent infiltration into the surrounding dermis. This can be a challenging differential when cyst have been partially ruptured and there are numerous secondary changes.