Erythema palmare hereditarium (EPH) is not a disease but an inherited tendency to develop persistent redness of the palms and fingertips. It may also affect the soles of the feet.

Erythema palmare hereditarium is also known as red palms or Lane's disease, and was first described by Dr John E. Lane in 1929. It is a form of primary palmar erythema. 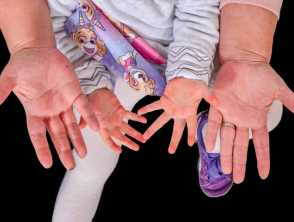 Palmar erythema in mother and daughter 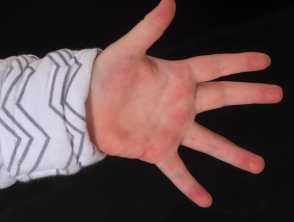 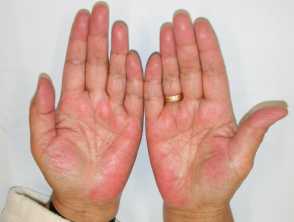 Erythema palmare hereditarium has only 17 cases described in published medical reports as of 2021. It is, however, probably under-recognised as it does not cause affected people significant symptoms. Of those who have been reported, the majority were women or girls (11 of 17). Most patients had an affected close family member (first degree relative) who also had EPH.

Erythema palmare hereditarium is thought to be genetic as the development of palm redness occurs at birth or in early infancy and persists throughout life; a parent is often also affected. To date, no specific genetic abnormality has been identified. Variable inheritance patterns have been described including an autosomal dominant, pseudodominant, and recessive transmission. Sporadic cases have been reported.

Given the limited publication on EPH, there is no current literature describing variation in presentation in different skin types.

Erythema palmare hereditarium is a benign condition with no known complications. However, some people who are affected are self-conscious of the redness of their hands.

Biopsy is not considered essential in the diagnosis but previous reports have shown dilated vessels in the entire dermis with no inflammatory infiltrate.

The skin changes seen in EPH can change with different environments, however it does not progress or involve other organs.