Favus or tinea favosa is in most cases a severe form of tinea capitis. It is caused by the dermatophyte fungus Trichophyton schoenleinii and results in a honeycomb destruction of the hair shaft. Although rare, it may sometimes occur as onychomycosis, tinea barbae, or tinea corporis.

No cases of favus have been reported in New Zealand. It is also relatively uncommon in the United States, with most cases being confined to areas where malnutrition, poverty and sub-standard living conditions exist. Favus has been found in Poland, Southern and Northern Africa, Australia, Pakistan, Brazil, the Middle East and the United Kingdom. 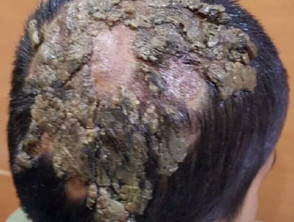 Who does favus affect?

Favus affects both males and females and occurs in both children and adults. Often the infection is caught during childhood or adolescence and persists into adulthood. It does not appear to be highly contagious but it is not uncommon for several family members to be infected, particularly where people are living very close to each other.

Favus is characterised by yellow cup-shaped crusts (scutula) that group together in patches like a piece of honeycomb, hence the name favus (Latin for “honeycomb”). Each crust encircles a strand of hair, which pierces the centre and pokes out.

There appear to be 3 stages of the disease according to its severity.

Some other forms of favus relating to their clinical characteristics have been described:

The diagnosis of favus should be confirmed by microscopy and culture of skin scrapings and hair pulled out by the roots (see laboratory tests).

What is the treatment of favus?

Favus requires treatment with an oral antifungal agent. As used in other types of tinea capitis griseofulvin is probably the most effective agent for infection with Trichophyton schoenleinii, but is no longer available in New Zealand. More recent clinical studies indicate that Trichophyton schoenleinii infections may successfully be eradicated using oral terbinafine, itraconazole or fluconazole. Treatment with these antifungal agents may require a longer treatment course then usual for tinea capitis.

In addition to systemic treatment, topical agents such as 2% ketoconazole and 2.5% selenium sulphide shampoos may be helpful. Debris and crusts from the scalp should be removed and the scalp cleaned regularly.

Favus is essentially a chronic disease and can last from 10 to 20 years. If it is not diagnosed and treated appropriately it can lead to alopecia (hair loss) and extensive scarring.