Homocystinuria is a genetic, inherited disorder characterised by elevated urine and serum concentrations of homocysteine (an amino acid). People with homocystinuria cannot properly process the amino acid metathionine, which is needed for growth and development in children and to maintain nitrogen balance in adults.

What are the signs and symptoms of homocystinuria?

Newborns with homocystinuria often appear normal, but signs and symptoms begin to develop in the first year of life, though they are not all obvious at first.

Signs and symptoms of homocystinuria may vary widely, and patients can present with any of the following:

Cutaneous signs of homocystinuria include:

Homocystinuria is inherited in an autosomal recessive pattern. Mutations of the CBS, MTHFR, MTR, MTRR and MMASHC genes have been implicated.

These mutations can lead to: 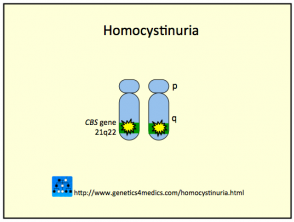 How is homocystinuria diagnosed?

Testing for homocystinuria can include:

How is homocystinuria treated?

There remains no cure for homocystinuria. However, around half of patients respond to high doses of pyridoxine (B6). Skin pigmentation can return to normal.

For those not responsive to pyridoxine, other treatments include:

Many patients with homocystinuria die as young adults due to arterial and venous thrombosis.

This page doesn't have an image or needs more images. Submit your photo for inclusion.