Interstitial granulomatous dermatitis is a rare skin disorder with asymptomatic skin coloured or erythematous lesions with various morphology. Linear cords (“the rope sign”), patches, papules or plaques are reported. Lesions tend to be symmetrically distributed on the trunk and proximal limbs. There is an association with various autoimmune diseases and infections, particularly rheumatoid arthritis.

Similar to the clinical heterogeneity of interstitial granulomatous dermatitis, various histological patterns exist. Epidermal changes include scale crust, hyperplasia with perforation and necrosis with epidermal loss. The majority of changes are in the lower dermis with perivascular and interstitial infiltrate with neutrophils, neutrophil dust, lymphocytes and histiocytes (Figure 1). Variable numbers of eosinophils are present (Figure 2, arrow). In some cases, there is palisading of lymphocytes and histiocytes around a focus of neutrophils or collagen fibres. Leukocytoclastic vasculitis and necrobiosis may be present. Inflammation may extend to the subcutis (Figures 3, 4). Fibrosis may be seen in later stages. 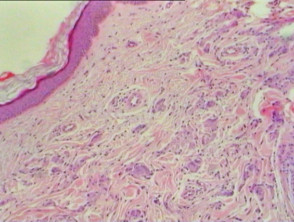 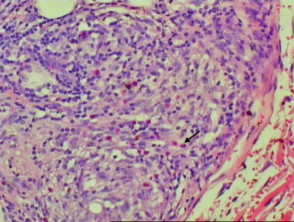 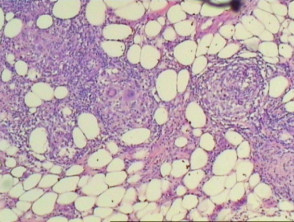 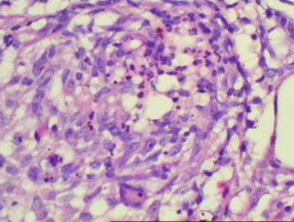 Immunofluorescence may be positive for IgM, C3 and fibrinogen in dermal blood vessels.

Leucocytoclastic vasculitis: Neutrophils and dust in interstitial granulomatous dermatitis are more widely distributed throughout the dermis in addition to around vessels.