What is hereditary angioedema?

Hereditary angioedema is a rare, autosomal dominant disease that is associated with a deficiency or dysfunction of C1-esterase-inhibitor (C1-INH) activity. Hereditary angioedema causes spontaneous, recurrent, and potentially life-threatening swelling in various regions of the body, including the larynx. 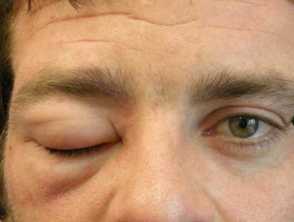 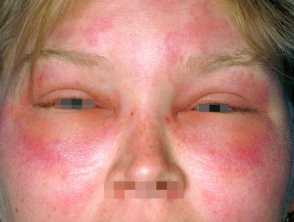 Lid angioedema - there was typical urticaria elsewhere on the body 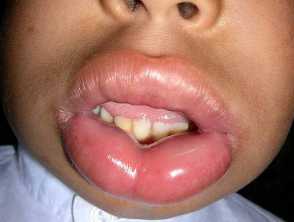 Lanadelumab was approved by the US Food and Drug Administration (FDA) in August 2018, in Canada in September 2018, and by the European Commission in November 2018. Regulatory applications for marketing lanadelumab are also being considered in Australia. Lanadelumab is not currently available in New Zealand.

Lanadelumab is marketed under the brand Takhzyro™ by Dyax Corp (a subsidiary of Shire) based in Burlington, MA, USA.

What is the indication for lanadelumab?

Lanadelumab is indicated to prevent recurrent attacks of hereditary angioedema in patients aged 12 years and older.

Lanadelumab may be self-administered by the patient or administered by a caregiver after undergoing training on subcutaneous injection technique by a healthcare professional.

The main contraindication to lanadelumab is hypersensitivity to the active substance or to any of the excipients.

To improve the traceability of biological medicinal products, the name and the batch number of the administered lanadelumab should be clearly recorded.

Lanadelumab is not intended for the treatment of acute attacks of hereditary angioedema. In the case of breakthrough angioedema, individualised treatment should be initiated with approved rescue medication.

There are no available clinical data on the use of lanadelumab in hereditary angioedema patients with normal C1-INH activity.

No dose adjustment is required for patients above 65 years of age because age is not expected to affect the exposure to lanadelumab.

The safety and efficacy of lanadelumab in children aged less than 12 years have not been established. No data are available.

Use of lanadelumab in specific populations

There are no available data on the use of lanadelumab in pregnant women to inform any drug-associated risks. Monoclonal antibodies such as lanadelumab can cross the placenta during the third trimester of pregnancy with potentially harmful effects on the fetus. Studies of lanadelumab in pregnant cynomolgus monkeys, treated with 33 times the maximum recommended dose for humans, revealed no evidence of harm to the developing fetus.

The safety and efficacy of lanadelumab in children under 12 years of age have not been established.

In clinical trials, no overall differences in safety or effectiveness have been observed between patients over 65 years of age and younger patients treated with lanadelumab.

The effect of lanadelumab on fertility has not been evaluated in humans. Lanadelumab had no effect on male or female fertility in cynomolgus monkeys.

What are potential drug interactions with lanadelumab?

No dedicated drug–drug interaction studies have been conducted with lanadelumab. Based on its characteristics, no pharmacokinetic interactions with co-administered medicinal products are expected.

What are the possible side effects of lanadelumab?

The most common side effects in patients receiving lanadelumab in clinical trials are described below.

Side effects with over a 10% incidence

At a dose of lanadelumab 300 mg every 2 weeks, the following adverse reactions where seen:

At a dose of lanadelumab 300 mg every 4 weeks, the following adverse reactions where seen:

Side effects of 1–10% incidence

Adverse reactions of 1–10% in incidence seen with lanadelumab include:

At a dose of lanadelumab 300 mg every 2 weeks, the following adverse reactions were seen:

At a dose of lanadelumab 300 mg every 4 weeks, the following adverse reactions where seen:

The development of anti-drug antibodies, including neutralising antibodies against lanadelumab, did not appear to adversely affect the pharmacokinetic and pharmacodynamic profiles or the clinical response.