Lebrikizumab is a novel, high-affinity, monoclonal antibody or biological agent that selectively inhibits interleukin 13 (IL-13) for the treatment of atopic dermatitis (eczema).

The US Food and Drug Administration (FDA) granted lebrikizumab Fast Track designation for atopic dermatitis (AD) in Dec 2019. In July 2022, there were one phase II and eight phase III clinical trials assessing the use of lebrikizumab in moderate to severe AD, with expected submission for approval in 2023 in the United States and the European Union.

Lebrikizumab has shown promising efficacy and a favourable safety profile in moderate to severe AD, including pruritus improvement as early as two days after commencing treatment. 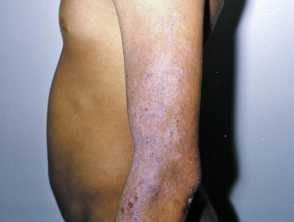 Chronic changes of atopic eczema with inflammation, scale and lichenification on the arm in skin of colour 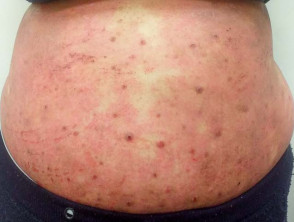 Extensive excoriated atopic dermatitis in an adult with skin of colour 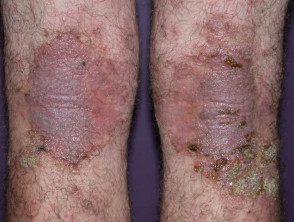 What is lebrikizumab used for?

Clinical trials for the use of lebrikizumab in the following conditions are currently underway:

Preliminary clinical trial results suggest that lebrikizumab may significantly improve AD disease severity when used in conjunction with topical steroids. It should also be used in combination with standard aspects of AD management such as moisturisers and emollients.

Lebrikizumab is thought to work by downregulating inflammatory processes that contribute to atopic dermatitis.

Lebrikizumab is an IL-13 antagonist. It is understood to inhibit IL-13 by neutralizing the cytokine and preventing binding and heterodimerization of receptor subunits IL-13Rα1 and IL-4Rα. Lebrikizumab binds to IL-13 with high affinity and blocks downstream signalling, reducing inflammation and thereby helping to relieve symptoms of AD and improve the barrier function of the skin.

What are the benefits of lebrikizumab?

Clinical trials have demonstrated promising results for lebrikizumab, including rapid improvement in atopic dermatitis symptoms and severity, and high rates of sustained itch relief and skin clearance at one year of treatment.

What are the side effects and risks of lebrikizumab?

Data on drug-to-drug interactions are limited.

What are the contraindications to lebrikizumab?