The classic triad consists of 3 features:

At least 2 of these features need to be present to diagnose the condition. MAS is caused by a spontaneous (chance) mutation in the GNAS1 gene. This gene then forms an abnormal protein that regulates cell proliferation, migration and survival. The mutation occurs early in the development of an embryo and affects only a subset of the patient's cells (called mosaicism). The mutation cannot be passed on to affected patient's children.

What are the clinical features of McCune–Albright syndrome? 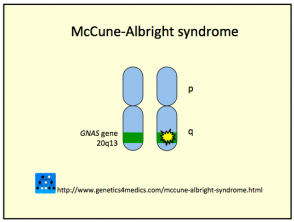 How is the diagnosis of McCune–Albright syndrome made?

What is the treatment for McCune–Albright syndrome?