A geode is defined as a small hollow rock. The term microgeodic was coined by a French radiologist Maroteaux to describe the x-ray finding of very small (< 1mm) punched out lacunar-like osteolytic lesions (radiographic holes) in the small bones of the fingers of infants affected by this condition [1].

Microgeodic disease or syndrome is rare. In most cases, it is thought to be due to cold-induced vasospasm, which results in avascular necrosis (self-destruction) of the bone. It is also called transient phalangeal osteolysis.

Microgeodic disease occurs in children. It was first reported in infants but has been reported to occur in children up to the age of 16, with an average age of 7 years. The majority of reported cases have come from Japan [2].

What are the clinical features of microgeodic disease?

Microgeodic disease usually occurs in the winter months. Patients present with swelling of one or more fingers or toes. There may be redness and sometimes pain. Often the clinical changes are described as 'chilblain-like' although chilblains have rarely been reported in association with microgeodic disease [3,4].

Most cases resolve spontaneously within six months although some cases have taken several years to resolve [2]. 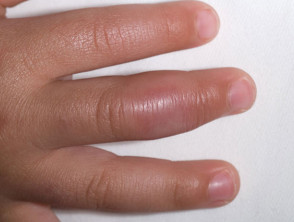 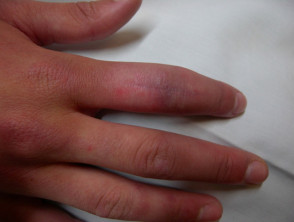 How is the diagnosis of microgeodic disease made?

The diagnosis is often made clinically.

An x-ray of the affected digit shows small lucent spaces or 'microgeodes'. These are small osteolytic areas with a sclerotic lining. There may be a periosteal reaction.

The x-ray findings are localised to the affected phalanx (or phalanges when multiple digits are affected). In contrast, MRI has been reported to show bone marrow oedema in many phalanges of the affected hand, where clinical and radiological findings are absent [5,6]. 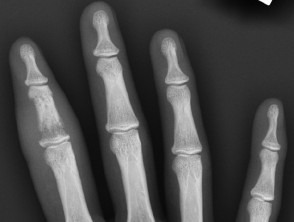 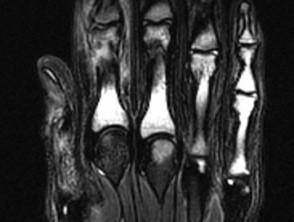 A biopsy of the affected bone shows necrosis of bone and fibrosis (scarring). Skin biopsy has rarely been performed in microgeodic disease. When concomitant chilblains have been suspected, skin biopsy has shown a lymphocytic vasculitis consistent with this diagnosis.

What are the complications of microgeodic disease?

In a small number of cases, microgeodic disease has been complicated by pathological fracture, which may heal with angulation deformity of the digit. Also, the affected phalanx has been reported to be shortened, suggesting the involvement of the growth plate.

What is the treatment for microgeodic disease?

As microgeodic disease is thought to be due to exposure to cold, it is important to keep the affected limb warm and dry.

If bone changes are severe, it may be worthwhile splinting the finger to prevent fracture.