Panfolliculoma is a very rare tumour; therefore, incidence data are lacking. There are fewer than 40 cases in the literature.

What are the clinical features of panfolliculoma?

A panfolliculoma usually presents as a neoformation or a slow increase in growth, resembling other lesions, such as basal cell carcinoma, infundibular cyst, and trichoepithelioma. Clinically, it presents as a solitary cystic tumour in the head or trunk up to 3–4 cm in diameter.

How is panfolliculoma diagnosed and what are the histological features?

Panfolliculoma is diagnosed histologically by the presence of differentiation in all parts of the hair follicle — the infundibulum, stem, and bulb/papilla (figures 1–4). The lesions are well circumscribed, and lack cellular atypia. Within the cellular components are granules of trichohyalin (figure 3), pale/clear cells of outer root sheath epithelium, and abortive hair shaft formation (figure 4).

They have been subclassified into three main variants: nodular, superficial, and cystic (figure 1), with an additional case that presented with sebaceous differentiation. 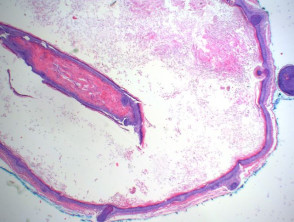 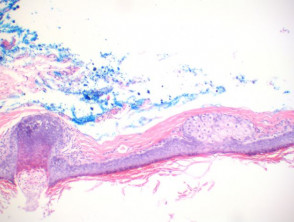 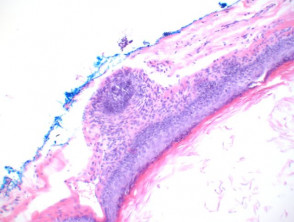 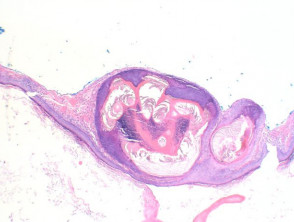 While not typically needed for the diagnosis, cytokeratin (CK)903 and CK 5/6 stain the tumour cells, whereas Ber-EP4 labels the germinative cells but not the follicular papillae.

What is the differential diagnosis for panfolliculoma?

Panfolliculoma differs from trichoblastoma by the presence of differentiation toward all elements of the follicle, including cystic structures containing corneocytes. Matrical differentiation is less conspicuous than it presents in matricoma.

What is the treatment for panfolliculoma?

Panfolliculomas are considered benign tumours and are treated by simple excision.