Pseudopelade of Brocq is an unusual form of permanent hair loss from the scalp, the cause of which is unknown. This is a specific diagnosis reached after excluding known causes of patchy scarring alopecia (pseudopelade) such as lichen planopilaris and discoid lupus erythematosus.

Pseudopelade of Brocq most commonly affects middle-aged and older women. However, it can present in both sexes and all age groups including children. It has rarely been reported to affect more than one family member.

The cause is unknown, as is the mechanism by which the hair loss occurs. Recent studies have shown the cells in the inflammatory infiltrate and the switched-on genes are different in pseudopelade of Brocq compared to lichen planopilaris and discoid lupus erythematosus, thus providing further evidence this is a distinct entity.

Pseudopelade of Brocq is not an inflammatory form of alopecia and the hair loss seems to be due to atrophy of the hair follicles rather than scarring.

Pseudopelade of Brocq is often found accidentally as a small patch of hair loss on the scalp. Single hairs may persist in the otherwise hairless patch. The hair loss usually begins at the vertex, the highest point on the scalp. The sides of the scalp (parietal scalp) is another area commonly involved. Rarely it has also been reported in the beard area.

The clinical features of the patch(es) of hair loss are:

The bald areas have been described as looking like ‘footprints in the snow’.

The progress of pseudopelade of Brocq is unpredictable however it is generally a slow process. Some patients are left with only one small area of hair loss whereas for others it continues for many years resulting in a significant cosmetic defect. 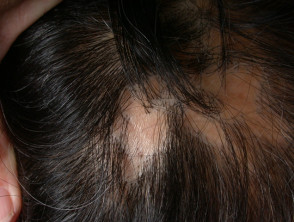 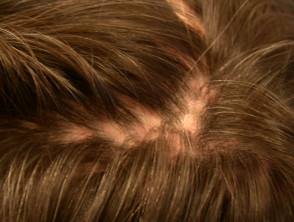 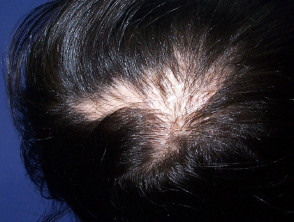 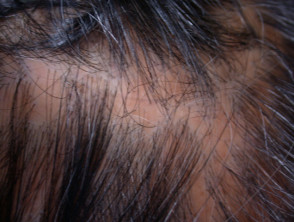 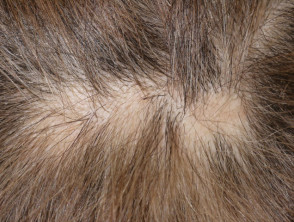 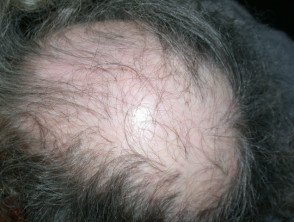 Pseudopelade of Brocq must be distinguished from ‘pseudopelade’, which is an umbrella term for any form of patchy scarring alopecia such as lichen planopilaris or discoid lupus erythematosus.

A scalp biopsy from a smooth patch shows a thin epidermis and sclerotic dermis with streamers of fibrosis down to the fat layer. There is no inflammation seen. Biopsy early in the process may show a small number of lymphocytes around the upper 2/3 of the hair follicle.

Braun-Falco (1986) proposed clinical and histological criteria for making the diagnosis.

No treatment has yet been found to stop the process or to regain lost hair. Surgery may help to improve the cosmetic appearance once the condition is no longer active.