Skin conditions can significantly influence psychological and social functioning. People with lesions on the face or hands have particularly high rates of mental health problems.

Stigmatisation, for example where others have avoided touch due to the skin condition, reinforces feelings of shame and can lead to depression and social anxiety. Unfortunately, downplaying this psychosocial burden or suffering in medical settings can lead to worse medical outcomes and poorer quality of life. 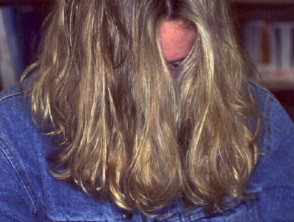 What psychosocial problems do skin conditions cause?

Skin conditions can reduce the quality of life, defined by the World Health Organization as a state of complete physical, mental, and social well-being. This can often be attributed to feeling pressured to look normal or comply with social standards.

Many people with a skin condition:

Many people who have a visible skin condition at some point will notice a person making an effort not to touch them because of their skin. Experiences like this can have a profound impact and make the individual feel ashamed and also more likely to notice similar events in the future.

The psychosocial consequences of having a skin condition can result in depression. Symptoms include:

Suicidal thoughts are thoughts like “I wish that one day I just won't wake up” or “Everyone would be better off without me”. These should be taken seriously and help sought from the patient's GP or mental health workers.

How does depression impact skin disorders?

People that have a skin condition and are also depressed may find it especially difficult to adhere to treatment recommendations. Poor adherence may lead to worsening of the skin condition, which may then make their mood even worse.

Obsessive–compulsive disorders are far more common in dermatological settings (22%) than in the general public (3.5%).

Compulsive repetitive behaviours can cause or exacerbate skin conditions. These include:

Some repetitive behaviours can be broken by using distraction techniques e.g. finding another activity to focus attention on when the urge to perform this behaviour occurs. However, in severe cases, it is unlikely that an individual will be able to stop these behaviours without psychological input. These repetitive behaviours often fall outside of conscious awareness, meaning that they can be particularly hard to control.

What is obsessive–compulsive disorder (OCD)?

OCD is characterised by obsessions and compulsions.

Compulsive behaviours are either not really connected to the desired outcome or the behaviour is excessive and time-consuming. Contamination and cleaning compulsions are common in OCD. These often take the form of repetitive hand washing, bathing, or showering. This can result in skin damage (irritant contact dermatitis) and hence a dermatologic presentation.

The impact of stress on skin conditions

How can stress exacerbate skin conditions?

Cutaneous responses to a sudden stress include:

This relationship between stress and symptoms can lead to a vicious cycle of somatic symptoms and psychosocial problems.

Stress and the itch–scratch cycle

Itch leads to scratching, which damages the skin and causes pain, which in turn inhibits itch sensations briefly. Problematic scratching can often lead to feelings of helplessness (in one’s own ability to resist scratching), or guilt (in failing to stop scratching in spite of knowing that it is unhelpful) and therefore to more emotional stress and distress. 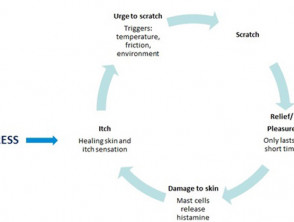 If a skin condition is interfering with the quality of life as described in this article, help is available through either a dermatologist, GP and/or mental health worker. Most of the problems described above can be treated with cognitive behavioural therapy. Medication may also be appropriate for problems like depression, anxiety, and obsessive-compulsive behaviours.