In reticulohistiocytoma, sections show a diffuse infiltration of numerous large, mononucleated or multinucleated histiocytes in the dermis (figures 1-3). There are associated lymphocytes and dermal fibrosis. Characteristically, the lesional cells have a dense pink cytoplasm, variously referred to as “oncocytic” or “ground glass” (figures 2, 3). 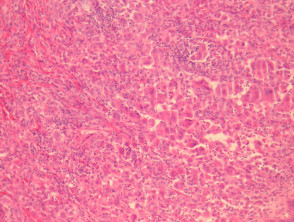 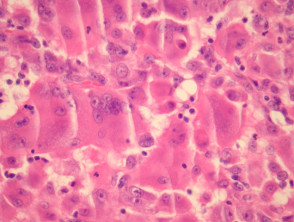 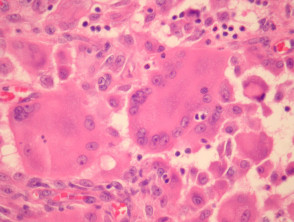 Reticulohistiocytoma cells are positive with CD68 and Factor 13a. S100 and CD1a are typically negative.

Other histiocytic diseases: these typically lack the characteristic “ground glass” cytoplasm seen in reticulohistiocytoma. In addition to morphologic features, CD1a and S100 immunohistochemical studies can be used to exclude Langerhans cell histiocytosis and Rosai-Dorfman disease respectively.